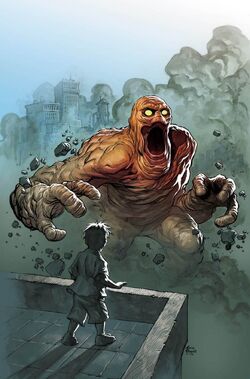 Rommbu first arrived on earth when his race sent him to the planet in order to demand humanity's surrender before they conquered the planet. When the humans refused he went to his spaceship, unbeknownst to him John Hunter had snuck aboard trying to escape from the police. Rombu eventually found John and demanded that he show Rommbu a safe place to land and recharge his ship, so John led him to the inside of an active volcano before an eruption, killing him and seemingly killing Rommbu.[1]

Rommbu however survived and was one of the monsters captured by the Collector and placed in his zoo of giant monsters hidden deep beneath Canada. During an assault by the Mole Man the Collector's security systems failed, allowing all of the creatures to escape. They eventually made their way to New York City through the Mole Man's tunnels and proceeded to go on a rampage, terrorizing the city. The monsters were opposed by the Thing, the Incredible Hulk, the Beast and Giant-Man. After they had dispatched all of the monsters they transported them all through a portal into the Negative Zone where they would be unable to harm the people of Earth. Since this time, many of the monsters have once again been spotted upon Earth.[2]

It would appear that Rommbu returned as well since Giant-Man claimed to be fighting him in a San Francisco park.[3]

During the Leviathons' invasion, Rommbu was among the monsters that appeared in San Diego. Rommbu assisted in the fight against the Leviathons. Kei Kawade later teleported Rommbu to Texas in order to help the Guardians of the Galaxy.[4]

Like this? Let us know!
Retrieved from "https://marvel.fandom.com/wiki/Rommbu_(Earth-616)?oldid=4668270"
Community content is available under CC-BY-SA unless otherwise noted.