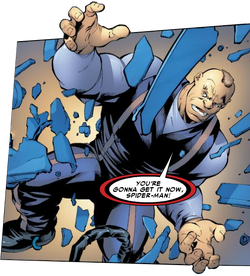 Ox has been with with the Enforcers since they worked with Lightmaster.

Montana alongside Ox and Fancy Dan came back together to work for Mister Fear, which pitted them directly against Daredevil. After Mister Fear's arrest, the Enforcers were taken in by the Hood's organization.

After many years of crime and even more of defeat Ox and the Enforcers were next seen as patrons at the Bar with No Name. The gang placed bets with John Ladue nicknamed "The Bookie" as they watched Spider-Man on TV battle a new villain called the "Basher". Spider-Man eventually showed up to stop Basher, but this turned out to be a fake as the true Spider-Man turned up soon after. Not happy about being conned, the Enforcers decided to attack the Bookie and forced him to return their money. The Bookie's father tried to contact Spider-Man out of fear to help rescue his son. The group was defeated once again and the Bookie was rescued.

Ronald is experienced in hand-to-hand combat.

Like this? Let us know!
Retrieved from "https://marvel.fandom.com/wiki/Ronald_Bloch_(Earth-616)?oldid=5249922"
Community content is available under CC-BY-SA unless otherwise noted.