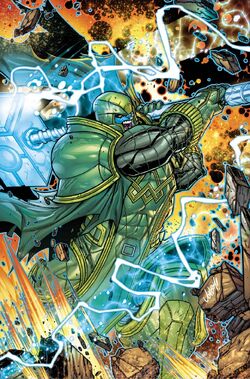 You three are guilty of attempted Revolution! Treason! So pronounces - Ronan the Accuser!

Upon the completion of his formal education, Ronan was enrolled in the Kree Public Accuser Corps, the main law enforcement body for the empire. Ronan did well and was steadily promoted. In a border incident, he stopped a fleet of Skrull ships from entering Kree space. As a result, he was made Supreme Accuser of the Kree Empire, making him responsible for enforcing the laws and decrees of the Kree, and second only to the Supreme Intelligence, and the Imperial Minister. As a proud member of the Kree aristocracy (blue-skinned Kree), he was not happy taking orders from the Supreme Intelligence. His attempt to cause a civil war was quickly halted, and he quickly returned to service. [9]

Ronan escaped from his confinement and led a temporary coup against the Supreme Intelligence when active hostilities broke out with the Skrulls. He imprisoned the Earth youth Rick Jones until the Intelligence unleashed the Destiny Force within Jones, ending the war.[16]

However the Accuser continued to serve the Kree Empire being mentally dominated by the Supreme Intelligence for a period of time, and battles Mar-Vell on multiple occasions.[17][18] He later regained his sanity and returned to his former position as Supreme Accuser.[19]

During Operation: Galactic Storm, Ronan and the Accusers defended the Kree Empire from Shi'ar intervention. When the Supreme Intelligence regained power, he recruited Ronan for the Kree Starforce on an assassination mission against Empress Lilandra.[20]

Later, Ronan attempted to press the Inhumans into service, as they had been created by the Kree. Although Black Bolt defeated Ronan in a contest, many Inhumans chose to stay in space regardless.[21]

Ronan also unsuccessfully tried to regain the Kree 'Psyche-Magnitron' from the Watcher.

During the Ruul's attempt to turn Earth into an intergalactic prison, Ronan was empowered with the vast energies of Ego. This energy was contained by Quasar, and Ronan was defeated.[22]

Ronan was framed and stripped of his Accuser Rank by House Fiyero.[23] He sought out the only witness, Tana Nile, who was part of Gamora's Graces. Unfortunately, Tana Nile was killed by the Annihilation Wave commanded by Annihilus before Ronan could learn exactly who had set him up. The ruling Kree remained ignorant of the threat the Wave posed and Ronan sought to warn them.[21]

Ronan later joined with the United Front along with Nova on the front lines against the Annihilation Wave. Many rank and file Kree trusted him over the commanders appointed by Fiyero, in the war against Annihilus.[3]

Ronan eventually returned to Hala with his sworn enemy Kl'rt the Super-Skrull and Praxagora to dethrone the House Fiyero who were planning to side with Ravenous and Annihilus. After knocking Ravenous unconscious and killing the House Fiyero, Ronan attempted to locate the Supreme Intelligence, only to find that Fiyero had lobotomized it. Mercifully killing it, Ronan exited its chamber to thunderous cheers of the Kree people, who unanimously called on him to become their new emperor.[24]

When Ravenous later came back to Hala with a stronger force, Ronan led a violent attack on Ravenous' fleet; in which entire building complexes were rocket propelled at Ravenous' forces and decimated the Annihilation forces. After the massive destruction of the Annihilation Wave by Galactus, Ronan was part of the participants in forging a treaty between the United Front and Ravenous that ceded certain Kree territories and all of the former Skrull Empire in order to end the hostilities.[25]

When the Phalanx invaded and assimilated the Kree, Ronan was forced to serve them to protect the Empire.[26] He was freed by the Wraith, whose Exolon symbiotes can drive fear into the Phalanx. Along with Kl'rt, Praxagora and Ra-Venn, Ronan made his way to Kree-Lar, the ceded Kree capital, now under the control of the N-Zone bugs, who were putting up quite a fight with the Phalanx. Ronan called to make an alliance, when he was actually looking to activate the 15,000 Kree Sentries beneath the palace. Originally meant for an eventual strike to take back their territories from the bugs, Ronan was going to use them to annihilate Hala, as a means to free his people from servitude. To that end, he had Praxagora and Wraith render the Sentries immune to the Transmode Virus.[27]

As the Sentries approached Hala, Ra-Venn informed Ronan that Nova, Quasar and Star-Lord have gone head-to-head with the Phalanx and asked that he call off the strike. However, Ronan refused to. Unfortunately, Ultron, who had taken over Praxagora, took control of the sentries to form a new body. Kl'rt barely managed to shield them all before Praxagora self-destructed. Descending to the surface, they helped Quasar defeat Ultron, by having Wraith use his Exolons to trap Ultron. With the Phalanx defeated, Ronan was left to pick up the pieces of the Kree Empire.[28]

Secret Invasion and War of Kings

When the Inhumans left Earth's Moon in searching and rescuing Black Bolt from the Skrulls following their invasion of Earth, Medusa tried to establish an alliance between the Inhumans and the Kree to help find Black Bolt and free him from his Skrull captors. Ronan agreed, but only on the condition that Medusa's sister Crystal became his bride. He provided them with information regarding the Skrull communications network, which the Kree have been trying for years to crack.[29]

Shortly after the Skrull invasion, the Inhumans arrived at the Kree homeland, and after subduing his bodyguards, confronted the Kree ruler, Ronan. Defeated, Ronan knelt before Black Bolt as the new ruler of the Kree Empire. To bring their two races closer together, Ronan and Crystal's marriage proceeded. However, Crystal saw the marriage as a political affair, to Ronan's disappointment.[7] On the wedding day, he was severely beaten by the Shi'ar Imperial Guard and was hospitalized.[7]

The War of the Four Cities

During the war with the Cancerverse, Ronan was a member of Nova's main attack force. In an effort to prevent further massive conflicts, Ronan joined the Annihilators. They protected Galador from the Dire Wraiths and oppose the Universal Church of Truth's attempt to revive the Magus.

Ronan was separated from his wife Crystal under the orders of Black Bolt. This separation was part of a truce that was made between Black Bolt and the Supreme Intelligence to ensure peace between Inhumans and the Kree Empire. Crystal and Ronan were deeply saddened by this decision, as their arranged marriage had eventually become a stronger relationship.

After the resurgence of the Black Vortex, Ronan and the Accuser Corps retrieved it from Gamora, Beast and Angel, who had submitted to its power and planned to reshape the universe their image with it.[31]

In retaliation, the three cosmically-enhanced beings assaulted Hala.[32] The Accuser Corps tried to fend off their attackers, but were notably overpowered. Ronan requested the Supreme Intelligence to use the Black Vortex's power to fight back, but the Supremor denied him of his request, arguing using the device would even lessen the chances of survival of Hala. Despite these warnings, Ronan submitted to the Black Vortex, ensuring a successful defense for the Kree homeworld, and forcing Gamora, Beast, and Angel to flee after the latter was knocked down.[33]

Hala was subsequently destroyed by Mister Knife, another player in the conflict who was looking for the Black Vortex.[34] Ronan later set out to rebuild the fallen Kree empire and have revenge for the destruction of its homeworld.[35]

In an act of penance, Ronan roamed alone the ruins of his planet, being slowly driven mad as he vowed to remember the names of all Krees killed during Hala's destruction. He came into conflict with the crew aboard the spaceship Astarion, which included several Inhumans, including Crystal, as well as their guide Marvel Boy, when said vessel entered the airspace of the dead planet. Ronan struck down the Astarion, and used his new powers to trap their crew in pocket universes that took form based on their victim's regrets, with the exception of Crystal, whom Ronan personally confronted.[36]

Crystal attempted to reason with Ronan, as he blamed the destruction of Hala on his emotional state caused by his break-up with her. Once Ronan listened to the voice of reason, he decided to blame himself for having disobeyed the Supreme Intelligence when Hala was under attack. Ronan attempted to commit suicide, but Crystal stopped him. Ronan's hope for the Kree Empire was subsequently strengthened when Marvel Boy planted the seed of his reality's Plex Intelligence into the remains of the Supreme Intelligence, giving Ronan a new leader for him to follow. Even though Ronan believed once again in a future with the mighty Kree Empire, he couldn't find self-forgiveness, and continued blaming himself for Hala's destruction.[37]

When a contingent of Kree arrived back at Hala after generations of exploration, they were shocked to find their world in ruins and the Kree Empire in disarray. So, the contingent began the rebuilding of the Kree Empire. Believing that continuing to follow the orders of the Supreme Intelligence was archaic, they chose to take Ronan prisoner.[38]

They cruelly experimented on him, replacing parts of his body with cybernetics. He was eventually found by the Inhuman king Black Bolt. Ronan explained to Black Bolt what the Kree were planning and apologized for the times he hurt the Inhuman Royal Family, including Crystal. He also begged Black Bolt not to let the Kree turn him into one of their puppets. Black Bolt whispered that he forgave Ronan before putting him out of his misery.[39]

Ronan is a cybernetically enhanced Kree. He was deemed to be an Alpha Plus threat by the Galadorian Spaceknight Ikon, but at the lowest he could maybe be an Alpha Class.[40] Ronan's cosmic potential was later unleashed by the Black Vortex, granting him augmented abilities.[33]

Kree Physiology: The natural attributes of the Kree race; resistance to poison, toxins and disease (Systemic Antidote), and a higher natural strength and body than a human. Ronan is a typical blue-skinned Kree in good physical shape. His equipment provides him further power.[41]

Black Vortex Empowerment: While using the distraction provided to him by Star Lord, Ronan utilized the Black Vortex to become cosmically infused with its power in order to battle several incursions from all sides on the Kree homeworld of Hala.[33]

Like this? Let us know!
Retrieved from "https://marvel.fandom.com/wiki/Ronan_(Earth-616)?oldid=6438664"
Community content is available under CC-BY-SA unless otherwise noted.