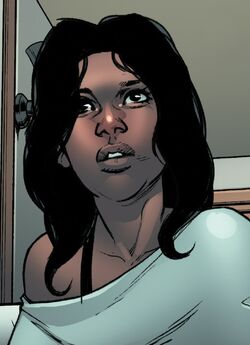 Riri, we were terrified when you were gone. But I accepted long ago that this is your calling. And I have faith that you'll be okay.

Ronnie Williams was the twice-widowed mother of Riri Williams who was initially reluctant to let her daughter become an armored superhero after learning that she had built her own suit;[3] however, she eventually realized getting in her way would strain their relationship, so she decided to try to support her and guide her as much as she could.[4]

Like this? Let us know!
Retrieved from "https://marvel.fandom.com/wiki/Ronnie_Williams_(Earth-616)?oldid=6415736"
Community content is available under CC-BY-SA unless otherwise noted.