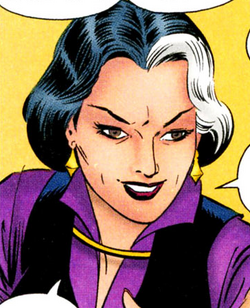 A famous and controversial attorney from Boston,[1] Rosalind Sharpe entered the life of Daredevil when she made an offer to Matt Murdock and Foggy Nelson to become her associates. Daredevil was surprised to find that Sharpe and Foggy knew one another until it was later revealed that she was Foggy's birth mother. She divorced her husband and left the family to better pursue her legal career. She was ultimately what inspired Foggy to become a lawyer.[citation needed]

Sometime after he and Matt joined Sharpe's firm, Foggy became a victim of Mysterio, who manipulated him into having an affair and then framing him for murdering a woman, thus ruining Foggy's relationship with Liz Allan. This also resulted in Sharpe terminating him from her firm, as she did not want her son's affair and murder accusation to bring negative publicity. When Matt started preparing Foggy's defense, Sharpe ordered him to cease, not wanting their firm to be involved at all. This resulted in Matt quitting the firm in disgust.[3] When it later seemed that Foggy had been murdered, she attended his funeral and told Matt that she blamed him for her sons death.[4]

Like this? Let us know!
Retrieved from "https://marvel.fandom.com/wiki/Rosalind_Sharpe_(Earth-616)?oldid=5533786"
Community content is available under CC-BY-SA unless otherwise noted.