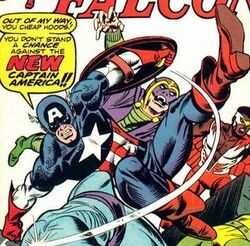 Roscoe Simons actively assumed the role of Captain America after Steve Rogers had abandoned the Captain America identity and became Nomad. Rogers' two replacements Bob Russo and "Scar" Turpin had attempted to become Rogers' official successors but both quit immediately after minor disruptions in their initial attempts to be Cap where Russo could not climb a wall and Turpin was defeated in his first battle preferring to fight with a tire iron. Neither Russo or Turpin received Rogers' indestructible shield.[2]

Roscoe was a Cap fan who got to live his ultimately fantasy when the very public Russo failed to continue. After proving himself capable in battle, he was able to gather the support of Rogers as the new Cap and was given the shield.[3]

The Falcon decided to begin training Roscoe though was still hoping Roscoe would decide to retire on his own fearing the worst could happen to him. Wilson's fears were well founded as Roscoe was killed by the Red Skull who was engaged in a money laundering scheme (breaking into banks and steal real money and replacing it with counterfeit bills) and was opposed by the Roscoe and the Falcon.[4]

The Skull killed Roscoe when he found out that the Captain America opposing him was Roscoe and not Rogers. In a graphic bit of scenery, particularly for a comic from this era, Roscoe was crucified and tortured by the Red Skull as a message to Rogers that any other person in the costume would also suffer the same fate if the Red Skull encountered any of these "fake" Captain Americas.[5]

Roscoe's sacrifice inspired Steve Rogers to abandon the Nomad identity and re-claim the mantle of Captain America despite Rogers' anger and disillusionment with the government.[5]

Roscoe possessed the strength of a man his age who engages in intense regular exercise.

Roscoe possessed all the weaknesses of an unenhanced human male.

Like this? Let us know!
Retrieved from "https://marvel.fandom.com/wiki/Roscoe_Simons_(Earth-616)?oldid=6131416"
Community content is available under CC-BY-SA unless otherwise noted.