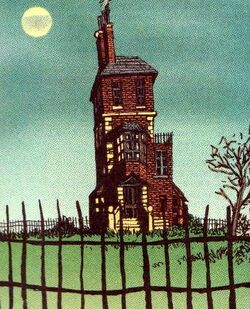 The Rosewell Sanitarium is a mental health facility located in the town of Charles, Massachusetts. Former A.I.M. agent Ellen Brandt once spent some time here coming to terms with the fact that she had betrayed her husband Ted Sallis. Ellen's betrayal ultimately resulted in the accident that permanently transformed Sallis into the Man-Thing. In addition to her emotional scarring, Brandt also suffered from physical mutilation when she became a victim of the Man-Thing's corrosive touch.

Another patient of interest at Rosewell was Eric Simon Payne, the Devil-Slayer. Payne's body had been merged with a portion of the shattered Nexus of All Realities. Unable to mentally cope with the new perceptions this fragment provided him, he was admitted to Rosewell and kept under constant observation by Nurse Mary Garcia. During his stay, he encountered a mute patient known only as Sorrow. Like Payne, Sorrow also possessed a fragment of the Nexus within her being. Though the hospital staff regarded Sorrow as a complete mystery, the other patients found her to be a beacon of hope.

Years after having been discharged from Rosewell, Ellen Brandt eventually returned, bringing along with her, the guardian of the Nexus of All Realities - the Man-Thing. These splintered portions of the Nexus attracted the attention of a being named Mister Termineus. After a brief encounter with Devil-Slayer, Termineus managed to make all of Payne's internal demons manifest themselves as corporeal beings. While Devil-Slayer attempted to contain the demons, the hospital was set ablaze and began to sink into a massive crater. The mystical catastrophe began to spread out into the town of Charles, but ceased when Ellen activated a mystical staff given to her by Mister Termineus.[1]

Like this? Let us know!
Retrieved from "https://marvel.fandom.com/wiki/Rosewell_Sanitarium?oldid=5472177"
Community content is available under CC-BY-SA unless otherwise noted.