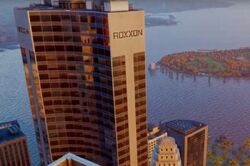 The Roxxon Corporation is a well known oil and energy corporation founded in 1932 A.D..[2] Its main headquarters are located at Lower Manhattan, in New York City.

Around a year after the Devil's Breath crisis, the Roxxon Corporation was expanding its reaches around New York, building new self-sustaining complexes using a new clean energy source, the NuForm, and also new research labs around the city. One of the new complexes, the Roxxon Plaza was buildt on Harlem, with the promise of being the first complex to fully use the NuForm reactor to power not only the plaza, but the entirety of Harlem.

The corporation suffered from a major backlash however, due to it's frequent clashes against the Underground and the dubious corporation practices done by Simon Kireger, the head of the NuForm project.

Like this? Let us know!
Retrieved from "https://marvel.fandom.com/wiki/Roxxon_Corporation_(Earth-1048)?oldid=6445626"
Community content is available under CC-BY-SA unless otherwise noted.