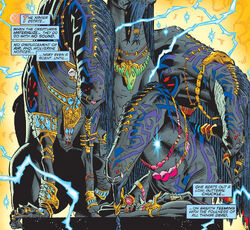 Kept as slaves by the rest of N'Garai society, they worked eternally under the cyclopean gaze of Kierrokk the Damned, the ruler of the N'Garai. The Ru'Tai regarded the N'Garai as unkillable and undefeatable. However, everything changed when their dimension was visited by a time-lost, berserker Wolverine, who killed many of the N'Garai and recovered from seemingly fatal wounds. Referring to this strange savage as "Mai'Keth the Undying", the Ru'Tai formulated a plan to liberate themselves. While the N'Garai tried to prove their power by conquering the humans, the Ru'Tai honed their power in secret practice.[2]

On the fateful day, the Ru'Tai made their move. Claiming to have evolved past the N'Garai, they killed Kierrokk and took control of their home dimension.[2]

One of the first things the Ru'Tai did was to send agents to Earth to see what was so special about the humans through vivisection.[3]

Like this? Let us know!
Retrieved from "https://marvel.fandom.com/wiki/Ru%27Tai?oldid=5748506"
Community content is available under CC-BY-SA unless otherwise noted.