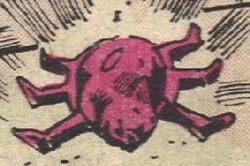 Millenia ago, the Elementals had created a kingdom for themselves on Earth, a kingdom that they sought to expand into the land that would later come to be known as Egypt. When they tried to enslave the local population, however, they were opposed by a young warrior named Dann and a wizard named Garret. These two joined their souls to arcane magics which created the Ruby Scarab. Dann, wielding the Scarab was able to sap the Elementals powers and banish them to another universe.[1]

In the modern age, the Elementals teleported N'Kantu, The Living Mummy, to their world in order to use him to retrieve the Scarab for them so that they could return to conquer Earth unopposed.[1] Under the command of the Elementals, the Living Mummy was transported to the pyramid headquarters of the Living Pharaoh, who was using the gem to restore his lost mutant powers. During the ensuing battle, the Scarab was stolen by the Asp who planned to sell it in order to become rich.[2] He and his partner Olddann soon sold the Scarab to Doctor Alexi Skarab, the descendent of the warrior Dann.[3] When the Elementals took over Cairo and sealed it within an impenetrable force field, Skarab attempted to unlock its power to defeat them. Initially failing, he was eventually visited by the spirit of Dann who revealed the Scarab's secrets. When next confronted by the Elementals, Skarab was able to use the Scarab's power to defeat them, flinging them across the dimensions themselves.[4] Believing the Scarab to have been drained during the battle sealed it away, not realizing that the Asp, Olddann and their new ally, the former Elemental Zephyr had stolen it once again.[5]

Like this? Let us know!
Retrieved from "https://marvel.fandom.com/wiki/Ruby_Scarab?oldid=6436989"
Community content is available under CC-BY-SA unless otherwise noted.