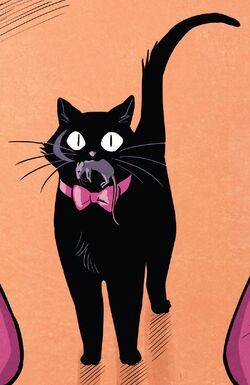 Rufus was one of the stray cats adopted by Dr. Hayes.[2] Rufus subsequently had his DNA experimented on to grant him telepathy. Rufus was meant to serve as a spy for Dr. Hayes, but Molly believed Rufus was on her side.[1] After Dr. Hayes was defeated, and the other cats were all eaten by Old Lace, Rufus was taken in by the Runaways.[3]

After coming to live with the Runaways, Rufus became a staple around the Hostel. Although his relationship with Old Lace has been antagonistic at times,[3][4] the pair mostly got along.[5][4][6]

Rufus possessed mutant powers identical to those of Alice and Gene Hayes due to the genetic engineering of Dr. Hayes.[1] These powers included:

Like this? Let us know!
Retrieved from "https://marvel.fandom.com/wiki/Rufus_(Cat)_(Earth-616)?oldid=6513158"
Community content is available under CC-BY-SA unless otherwise noted.