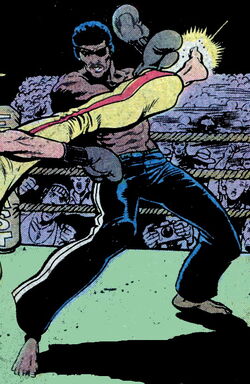 Rufus Carter was a CIA agent who investigate munitions smuggling. One such case brought him into contact with Shang-Chi and Leiko Wu who he enlisted to help retrieve intelligence files on Samisdat. After doing so, Carter decided to leave the CIA.[2] Carter was later contacted by his former superior Nicholas Blair that they planned to let a sabotage from an early case by Carter proceed to catch the saboteur. Carter was against this plan and set out to stop the saboteur but was shot by Blair. He survived the shot and set out to enlist aid from Shang-Chi. Together they were able to discover the double agent was Blair himself and were able to stop and arrest him.[3] Working freelance, he again requested assistance from Shang-Chi and helped Jock McBride recover his land and the gold buried on it.[4]

After the Civil War, he was listed as a sympathiser to the Superhuman Registration Act.[1]

The character was named after Carter's Super Midnight, a brand of copying ink.

Like this? Let us know!
Retrieved from "https://marvel.fandom.com/wiki/Rufus_Carter_(Earth-616)?oldid=6105646"
Community content is available under CC-BY-SA unless otherwise noted.