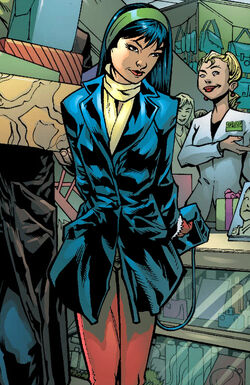 Rumiko Fujikawa was the daughter of Kenjiro Fujikawa, CEO of Fujikawa Industries. From very young, she was educated in a conservative environment and wasn't even allowed to join the family business due to being a girl.[1]

After Tony Stark's disappearance, Fujikawa took over Stark Enterprises, but instead of reclaiming his company, Tony founded Stark Solutions[2] and later started a partnership with Fujikawa.[1]

As the site to present the company's new projects to the World, Tony Stark chose the paradise island of Isla Suerte and Kenjiro Fujikawa decided to bring his granddaughter along. While there, Rumiko met Tony and forced him to go with her on a walk in the beach to annoy her family, who'd be driven "berserk" when it was known she "dated the infamous playboy Tony Stark".[1]

This left Tony with the impression she was just a "spoiled, flighty airhead", but after seeing her in action commandeering medical personnel and helping them deal with the wounded during Firebrand's attack and the following volcano eruption, she got his respect, and he even developed a mild attraction towards her.[3]

They met again when she heard he had been checked at Basel Stress Clinic, and so decided to fly from Tokyo to see him. During their time together, she tried to keep him away from work in order for him to relax and recover. At a picnic, she opened up to Tony and revealed that her rich-girl act was a way to tell her family that she wouldn't always follow their expectations, but the part of liking Tony wasn't a pretense. After this, the two got romantically involved.[4]

Rumiko's romance with Stark enjoyed many highs and lows. She enjoyed his jet-set lifestyle but found him often too obsessed with his work and failing to pay enough attention to her.[4][5][6][7] When she proclaimed her love for him and Tony remained silent, their relationship took a turn for the worst.[8] This was made even worse due to all the problems facing Stark in his other life as Iron Man at this point, such as his armor temporarily becoming sentient and attempting to kill him,[9] or the arrival of the Sons of Yinsen, a group dedicated to the memory of the scientist who helped Stark develop the original Iron Man armor.[10]

After she and Tony broke up, she slept with his business rival and enemy, Tiberius Stone. In remorse, Rumiko arranged for Stark to acquire sufficient stock in his old company for him to reclaim control of it.[citation needed]

Rumiko was later murdered when she was attacked by an Iron Man impostor named Clarence Ward.[11]

Rumiko has revealed herself to be an extremely resourceful person on several occasions: from breaking through locks[4] to mobilizing entire medical teams to help people after a catastrophe.[1]

Rumiko Fujikawa claimed to be 27 when she first met Tony.[1]

Like this? Let us know!
Retrieved from "https://marvel.fandom.com/wiki/Rumiko_Fujikawa_(Earth-616)?oldid=5872713"
Community content is available under CC-BY-SA unless otherwise noted.