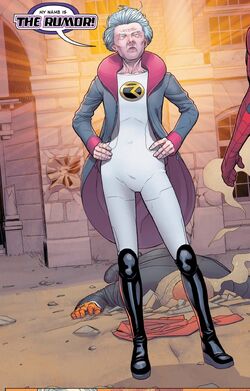 In 1939, Marnie was among the many test subjects of a Japanese project, which wanted to create a counterpart to Captain America.[1] Marnie was one of the very few on whom the experiment was successful, obtaining super strength and X-ray vision, as well as an unidentified power of persuasion.[2] At an unspecified moment she adopted Rumor's identity. In 1941 she moved to America and became an ally of Cap.[1] At some point she discovered the existence of the underground nation of Under-York.[3] Despite being an ally of Captain America in '43 she was equally deported, like all the other Japanese-Americans. Cap would allow her to escape, but Marnie preferred to go to the prison camp, to help the prisoners as best she could.[1] In the camp, she came across another superhuman, an overseer named Kenneth, who fed on pain, and who angered prisoners as much as possible in order to have more despair to feed on.[1] Fortunately for Marnie, Kenneth did not expect to face another person with superpowers, so she managed to launch a surprise attack and defeat him.[1]

Nearly eighty years later, Marnie became one of Peter Parker's neighbors. One day the latter helped her to bring heavy envelopes home, and she began to suspect that he was equipped with superpowers, so she put a camera outside his window and saw him come out twirling, discovering his identity as Spider-Man.[3]Some time later Runmor teamed up with Spider-Man to prevent the evil Under-York dictator from bringing home his daughter and grandchildren who had fled to the surface to escape his dictatorial regime.[4] Later she helped him face her old enemy Helminth.[5]

Like this? Let us know!
Retrieved from "https://marvel.fandom.com/wiki/Rumor_(Marnie)_(Earth-616)?oldid=5798751"
Community content is available under CC-BY-SA unless otherwise noted.