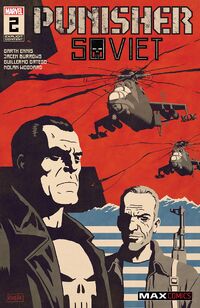 Others
United States of America

The Soviet–Afghan War was a conflict that took place in the 1980's where in insurgent groups known collectively as the Mujahideen fought a guerrilla war against the USSR and the Soviet Army and the Afghanistan government for over nine years. The Mujahideen were backed primarily by the United States making it a Cold War proxy war.

In 1986, Logan saved Mordad from the Russians during a battle.[1]

The USSR finally withdrew from the country in 1989.[2]

The following appearances should be considered topical references: The Hulk leaped across the globe landing in the Nuristan Province. He tried to find food but was attacked by a squad of soviet soldiers, but he smashed them all with ease. When news reached Moscow, they sent their superhuman team the Soviet Super-Soldiers. He arrived at the Presence's base, where he is attacked by the Soviet team. The then decided to work together the stop the Presence.[3]

The US Army came to Doctor Strange for advice as a group of Soviet soldiers in Afghanistan were being effected by magic their weapons were becoming magical sword and their tanks fantastical beasts. This was also happening on other basis around the world.[4]

While investigating a global drug trade Cloak and Dagger learned that the funds where being used by the Afghan rebels to fund the was against the Soviet Union.[5]

The X team, composed of Deadpool, Bullseye, Domino and Silver Sable were commissioned by the US government in 1983 and conducted clandestine missions, including interventions in the Russian-Afghan conflict.[7]

Retrieved from "https://marvel.fandom.com/wiki/Russian-Afghan_War?oldid=5859587"
Community content is available under CC-BY-SA unless otherwise noted.