For fictional versions of Ruth Atkinson as a character within comic books and/or other media,
visit this disambiguation page.
Ruth Atkinson 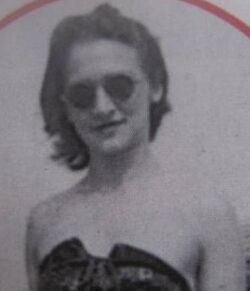 Ruth Atkinson was born in Toronto, Canada. She and her family moved to upstate New York while she was still an infant, and she was raised there. Her brother Ted Atkinson (1916-2005) was a famous thoroughbred horse racing jockey, and was inducted into the National Museum of Racing and Hall of Fame in 1957.

Atkinson worked as a freelance comic book penciler and inker between 1942 and c. 1952, but went into retirement shortly following her marriage. Her married name was "Ruth Ford". She spend her last years in Pacifica, California, where she died from cancer.

Atkinson is thought to have joined the comic book industry as one of the artists of the Iger Studio, a comic-book "packager" that produced comics for publishers on an outsource basis. She worked alongside a number of fellow female artists of the 1940s, such as Fran Hopper, Lily Renée, and Marcia Snyder.

Most of Atkinson's early credits were for the publisher Fiction House, where she penciled the features "Clipper Kirk" and "Suicide Smith" in Wings Comics, "Tabu" in Jungle Comics, and "Sea Devil" in Rangers Comics. At one point, Atkinson was hired as Fiction House's art director, a managerial position requiring her to supervise other pencilers. She resigned because this position prevented her from continuing her own work as a penciler.

Atkinson worked for various publishers as a freelancer, but is mostly famous for working on Patsy Walker and Millie Collins (Millie the Model) for Timely Comics, and she is typically credited as their co-creator.

Atkinson later penciled "true-life" adventures for the publisher Eastern Color Comics, and some of the earliest romance comics for Lev Gleason Publications. She seems to have retired in the early 1950s, and has no known credit following 1952.

Her article in Wikipedia

Like this? Let us know!
Retrieved from "https://marvel.fandom.com/wiki/Ruth_Atkinson?oldid=6835766"
Community content is available under CC-BY-SA unless otherwise noted.