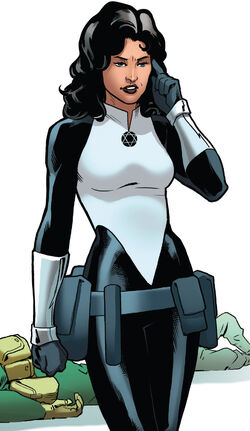 Sabra was born near Jerusalem, Israel,[6] and was raised on a special kibbutz run by the Israeli government along with her family, after her mutant power manifested, Ruth was the first superhuman agent created to serve the Mossad (the Israeli Secret Service). She was also a police-woman in the Israeli Police forces of Tel Aviv, as a cover. It was presumably at this time she saved a near-to-death junkie found in an alley, granting to her powers at the same time she saved her by transferring her life-energy.[7]

Her first public act as Sabra was to battle the Incredible Hulk, whom she mistakenly believed was working with Arab terrorists operating in Israel. As Hulk left with the body of a young Arab killed by the terrorists, Sabra chased him. At the end of their encounter, she was devastated by Hulk's speech about the Israeli-Palestinian conflict and the death of Sahad.[2]

She was part of the Contest of Champions between Death and the Grandmaster, on Iron Man and the Arabian Knight's team, although rivalry between their respective countries made this alliance difficult.[8]

Sabra was brought on the site of a hostage taking where the Israelis for Anarchy and Windstorm were besieged in a kibbutz with the deaf son of an American ambassador. She ended-up depowering and leaving an agonised Windstorm, and saved the boy.[7]

She battled Hulk another time, a few month later, when he and Ulysses targeted Max Meer, a boy susceptible of becoming the next Adolf Hitler.[9]

Some years later, Sabra's young son was killed in a terrorist attack. She disobeyed orders in order to bring her son's killers to justice.

Supporter of the mutant cause

Years later, Sabra found herself caught up in the events of the anti-mutant campaign known as Operation: Zero Tolerance, gathering Mossad intel to pass on to the X-Men. She was seemingly part of Xavier's Mutant Underground.[10] Sabra mentioned the fact that Xavier suggested on many occasions for her to join the British team Excalibur.[3]

It was at this time Sabra fought alongside the X-Men and began to subscribe to the philosophies of Charles Xavier and teaming-up regularly with other mutants. Inquiring about Magneto's true identity with Gabrielle Haller, she attacked Xavier's School for Gifted Youngsters in order to capture Joseph, who she thought was Magnus, but retreated after Maggot revealed Joseph's true origins.[11] Later, she asked for Excalibur's help in order to stop Legion who was threatening Israel.[12]

Sabra was formerly a member of the X-Corporation's Paris branch. After Genosha was demolished by Sentinels, she accompanied Charles Xavier and other X-Men members to visit the place, where they eventually found an "insane" Polaris.

Sabra was one of a handful of mutants that retained their powers after M-Day.

Sabra joined an O*N*E policing force against unruly mutants constituted of Micromax, Sentinels, and Bishop as leader, associated with Iron Man's pro-registration side in the Civil War.

In return for Sabra's participation, Mossad got information and technology from the United States for the creation of their own registration act.[13]

Sabra was later part of a makeshift superhuman team put together by MI5 to combat a large-scale terrorist attack on the city of London by R.A.I.D.. Sabra handled herself commendably during the attacks, though she at times butted heads with her Muslim teammate, the Arabian Knight. Together with her allies Sabra fought such villains as Zaran and Machete,[14] the Death-Throws,[15] and a giant Dreadnought before heading back home to Israel. During their adventures together, she and the Arabian Knight seemed to develop a grudging respect for one another.[16]

During the Skrull Invasion, Sabra was attacked in Israel by at least two super-skrulls.[17]

When Doctor Octopus suspiciously offered to world's leaders to revert the Greenhouse Effect by using a giant web of satellites, Spider-Man distrusted him and started a crusade to destroy Octopus' satellite factories and missile launcher facilities along with Black Widow and Silver Sable. He asked for help from other heroes around the world such as Sabra to destroy the plants nearest to them. When Sabra was about to ride one missile to stop it, Crossbones shot her, but it was only a glancing hit.

Sabra is a mutant who possesses various superhuman attributes:

Sabra is a formidable and experienced combatant, having been trained in both armed and unarmed combat by the Israeli military as well as police investigation techniques and intelligence gathering.

Sabra utilizes wrist gauntlets that fire plasma bursts and cape that fires paralyzing quills. Her costume has been known to change frequently depending upon her mission and as technology improves.

Sabra possesses the standard weapons and combat training given to members of the Israeli military.

Sabra cape houses certain anti-gravity devices, enabling her to fly through the air at speeds greater than 300 miles per hour.

Like this? Let us know!
Retrieved from "https://marvel.fandom.com/wiki/Ruth_Bat-Seraph_(Earth-616)?oldid=6463906"
Community content is available under CC-BY-SA unless otherwise noted.