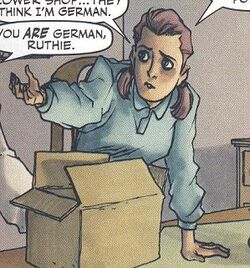 Ruth Eisenhardt was the sister of Max Eisenhardt, later known as Magneto. In a time when the situation worsened for Jews in Nazi Germany and Ruth's uncle, Erich, suggested to leave the country, her father Jakob insisted that they stay and learn to figure out the rules. They did not stay long after November 7, 1938, when Herschel Grynszpan assassinated the German attaché, Ernst vom Rath, and the Nazis started to terrorize Jewish people in the Reichskristallnacht, they fled to Warsaw, Poland. Ruth and her family lived in a Jewish sector, where the Nazis built the Warsaw Ghetto in October 1940. In 1941, Ruth became very sick because of the worsening conditions in the ghetto. When the Nazis started to deport ghetto inhabitants to the Treblinka extermination camp in July 1942, Ruth and her family tried to escape. On their way to their hideout, they were captured by Nazi soldiers and as they were executed, the shots missed Max without anyone's notice. Their corpses and Max were buried in a mass grave.[1]

Like this? Let us know!
Retrieved from "https://marvel.fandom.com/wiki/Ruth_Eisenhardt_(Earth-616)?oldid=6076809"
Community content is available under CC-BY-SA unless otherwise noted.