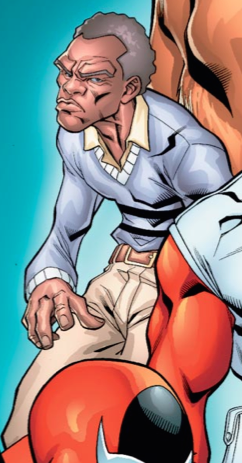 Rutherford Princeton served as a Canadian police officer during the 1920s. He had been sent "on loan" to Chicago to assist with the enforcement of Prohibition. During this time, Princeton had a romantic relationship with a woman named Amelia, who was later to be revealed as being Nemesis. The two later served together as members of Alpha Flight, though Princeton was not aware that she was the same woman.

For an unknown reason in recent times, Rutherford Princeton was in a coma for just under fifteen years. While researching Veterans of the Canadian military, Walter Langkowski became aware of Princeton's unique bio-rhythmic signature. At the age of 96, Rutherford was shocked out of his coma through Langkowski's transformation into Sasquatch. Langkowski was forming a strike force of Canadian super powered beings to save his teammates, who had been captured by an alien race, The Plodex.

Revived from his coma, the elderly Princeton had no desire to join Langkowski's strike force, but rather wanted to live life to its fullest. When he discovered however that with his newfound powers, living a normal life made him feel empty, he agreed to join Langkowski's new Alpha Flight. This mission was successful, and the original members of Alpha Flight decided to transport the Plodex eggs that had been discovered back to the Plodex homeworld. Princeton stayed on as a member of Langkowski's Alpha Flight as Centennial.

After a series of blunders attempting to alter the past, a temporally displaced copy of the original Alpha Flight members was brought into the present. It is unknown what transpired after that, however a vague glimpse into the future showed Princeton and his lost love, Amelia, side-by-side in death.

Though as of yet, Centennial's powers have not been fully described, we have seen evidence of great super strength, flight, ability to project a highly concentrated beam of heat from his eyes, and invulnerability.

Like this? Let us know!
Retrieved from "https://marvel.fandom.com/wiki/Rutherford_Princeton_III_(Earth-616)?oldid=5684371"
Community content is available under CC-BY-SA unless otherwise noted.