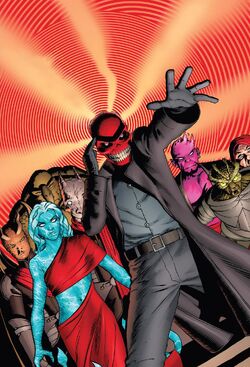 The S-Men were formed by the resurrected Red Skull as an antithesis to Professor X's X-Men with a mission totally opposite to Xavier's. Red Skull recruited servants and enhanced them using mad science and magical artifacts, creating the S-Men, with the main objective to protect humanity by destroying mutantkind.

Their first recorded mission was the retrieval of Professor X's corpse from his mausoleum so Red Skull would fuse part of his brain with his in order to gain powerful telepathic powers. They detonated an explosion at the mausoleum to temporarily conceal the theft.[1]

Their second was precipitating the Red Riot where close to a hundred people lost their lives either at the hands of the S-Men or the rioting caused by their leader's nascent telepathy.[2][3][4]

In the months that followed they would try to recruit Jet Black[5] to their cause and would be sent out into the world by the Red Skull on their third recorded mission to capture mutants, Inhumans, and members of the Avengers Unity Division.[6][7]

Most of the S-Men were killed by Magneto when he infiltrated Genosha soon after the Red Skull turned it into a mutant concentration camp. The only surviving members were Honest John, the Dangerous Jinn, and the nameless monk.[8]

Retrieved from "https://marvel.fandom.com/wiki/S-Men_(Earth-616)?oldid=5550578"
Community content is available under CC-BY-SA unless otherwise noted.