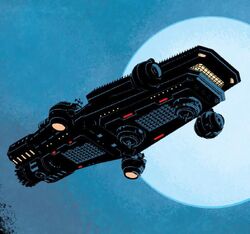 The eggheads call it a "Helicarrier." I always been too embarrassed to ask 'em what that means.

The Helicarrier, an aircraft carrier specifically designed to be itself capable of independent powered flight in addition to the standard functions of aircraft carriers, is the world headquarters and signature capital ship of the extra-governmental intelligence/defense agency S.H.I.E.L.D.. [citation needed]

Built by Stark Industries and designed by Tony Stark, Dr. Reed Richards, and former X-Man Forge. In addition to housing wings of fighters and other aircraft, the Helicarrier bristles with advanced weaponry, including an intercontinental ballistic missile. [citation needed]

The first Helicarrier was proposed by Stark Industries as a political compromise among the signatories of the treaty in response to fears that any nation hosting the Directorate's main headquarters would be subject to attack by hostile organizations such as Hydra with domestic political fallout sure to follow immediately thereafter.[citation needed]

When Tony Stark himself became Director of S.H.I.E.L.D., he ordered construction of a red-and-gold Helicarrier in the motif of his Iron Man Armor. This Helicarrier was brought down by the Red Hulk[1] to be rebuilt as the Hellcarrier, the headquarters of the Intelligencia.[2]

The main S.H.I.E.L.D. Helicarrier was disabled by an alien computer virus unleashed by a Skrull agent posing as Edwin Jarvis as part of the Secret Invasion. When the Skrull Invasion was over and Norman Osborn the new director of S.H.I.E.L.D. (now called H.A.M.M.E.R), he soon ordered to dismantle it, to build his own H.A.M.M.E.R. Hellicarrier.[citation needed]

After the attack of the Serpent and the return of H.A.M.M.E.R., Rogers decided to reactivate S.H.I.E.L.D. and build a new Helicarrier called Iliad.[3][4] Iliad remains a primary vessel for Daisy Johnson, Maria Hill, and the current team of Secret Avengers.[5]

It is not yet known what criteria S.H.I.E.L.D. has used to name the Helicarriers, but many share a relation with Greek mythology.

S.H.I.E.L.D. had a fleet of airborne aircraft carriers (prior to the assault by the Liberators), one of which was referred to, at one point, as the Helicarrier. They aren't S.H.I.E.L.D. primary HQ, this being the Triskelion. The engines that keep the carriers aloft were designed by Tony Stark and were modular enough to be used in a space shuttle by the Ultimate Fantastic Four. These fleets of Helicarriers are smaller than the Earth-616 Helicarriers and are more conventional aircraft carrier shape, but are far more plentiful.

One Helicarrier, the U.S.S. Jimmy Carter, was used as the command center for the New Ultimates briefly while they were under the direction ofGregory Stark. Gregory Stark also noted that this realities Hank Pym was the orginal designer of the Helicarrier, although it has been enhanced and upgraded with Stark technology.[19]

The Helicarrier was used as the last remaining base of the resistance to the Zombie-contagion.[22]

The Helicarrier was the mobile base of S.H.I.E.L.D.. Aboard the ship, Deadeye was recruited was into S.H.I.E.L.D. and armed with the equipment he'd use as Grifter. The Helicarrier then transported Cash and Ms. Honeygate to Australia.[23]

S.H.I.E.L.D. used this Helicarrier as its main HQ and military command airship.

It was destroyed during the Skrull Invasion.

The Helicarrier serves as the mobile airborne headquarters of S.H.I.E.L.D.. That is, until its destruction at the hands of the Green Goblin. It's later replaced by the larger and more versatile Tri-Carrier. The wreckage of the original was later converted into a base for the Goblin nicknamed the "Hellcarrier". Ultimately, it was taken over by Electro and set to self-destruct and take out New York, but the timely intervention of Spider-Girl and Spider-Ham launched it into space to detonate harmlessly.

The Helicarrier was a flying aircraft and the base of the spy agency S.H.I.E.L.D.. It was here that Spider-Man was given a new identity.[24]

The Impossible Man had the ability to shape-shift anything he wanted to at will. When the Controller slaped a Slave Disc on him, The Impossible Man went crazy, and crashed the S.H.I.E.L.D. Helicarrier before transporting all of the agents along with the rest of the people in Washington, D.C. to "Mouse-Land" in California.

Thosee Helicarriers were owned and operated by the S.H.I.E.L.D. and its elite unit, the Red Guard.[25]

The Helicarrier was fortified and upgraded by S.H.I.E.L.D. Director Reed Richards.[citation needed]

The Army Air Force built a "Dirigi-Carrier", a airborne battleship kept in midair by dirigibles right underneath the vessel. The Dirigi-Carrier was used as the base of the Office of National Emergency (O*N*E*).[26]

The Helicarrier is a seaworthy ship capable of VTOL flight by way of four huge lift fans mounted on the sides. It has two runways, one with direct access to a hangar at the rear is aligned along the spine of the vessel and is used for forward launches of aircraft, and the other diagonally aligned runway above is suitable for landings. Refractive panels on the underbelly offer the craft a broad camouflage of clouds or sky when viewed from below. The Helicarrier was heavily damaged in an attack, yet was still able to limp to open water on the strength of only three of its colossal fans.[27] It could carry many aircraft including F-35s.[citation needed]

A second generation series of helicarriers are larger than the original, and built with a stronger focus on direct combat capability. Ventral gun batteries offer a wide area of fire below, while font and side-mounted cannons provide some coverage to the surrounding area. Networked fire control systems employ satellite links and allow for the combination of three helicarriers to operate in harmony, sharing targeting data and firing solutions on distant targets as small as man-size. Upper level armaments are limited by the carrier flight deck. Four huge repulsor engines address the vulnerabilities of the earlier lift fans by having no reliance on a fast-spinning mass, and avoiding the need for a dense enough air mass to remain aloft. This ensures that these next generation helicarriers can attain a higher altitude than their predecessor.[21]

Ajax holds Vanessa Carlysle captive aboard a derelict Helicarrier, though its manufacturer and operator are unknown.[28]

Like this? Let us know!
Retrieved from "https://marvel.fandom.com/wiki/S.H.I.E.L.D._Helicarrier?oldid=6448480"
Community content is available under CC-BY-SA unless otherwise noted.