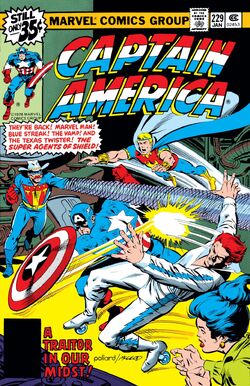 Years ago, S.H.I.E.L.D. decided to form a team of super-powered operatives consisting of Blue Streak, Marvel Man (Wendell Vaughn, the future Quasar), Texas Twister, the Vamp, and the Falcon. [1]

Blue Streak and Vamp turned out to be agents of the Corporation, and the team disbanded before their first official mission. S.H.I.E.L.D. continued to recruit superpowered operatives, as it had before forming the Super-Agents, but no longer placed in a distinct unit.[2]

Like this? Let us know!
Retrieved from "https://marvel.fandom.com/wiki/S.H.I.E.L.D._Super-Agents_(Earth-616)?oldid=6420394"
Community content is available under CC-BY-SA unless otherwise noted.