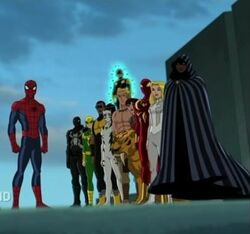 The S.H.I.E.L.D. trainees are young and inexperienced super heroes brought together by Nick Fury to train them. Five of the most recent recruits included White Tiger, Power Man, Iron Fist, and Nova.[2]

Former S.H.I.E.L.D. trainees included Sam Wilson and Wade Wilson (not related), but the former left to join the Avengers and was fired by Nick Fury,[3] and the latter became a mercenary.[4]

After a year of vigilante activities, Spider-Man warranted Fury's attention and wanted him to join S.H.I.E.L.D.. He initially refused, but ultimately accepted.

The first day of training, Spider-Man realized he wasn't the only young superhero being trained by S.H.I.E.L.D. and sadly left. When he was attacked by the Frightful Four the same day, the four trainees arrived and helped him defeat them as a team.

After the Frightful Four were defeated, Spider-Man would later agreed to join and lead the trainees, with the condition of maintaining his own solo hero career outside of S.H.I.E.L.D work.[5]

They have been on Spidey's back whatever or whenever the current situation is in the field.

After Spider-Man temporarily became an Avenger, other super hero teens had come out of the woodwork to pick up his tab as vigilante of New York. When Spidey found out, he convinced Fury to expand the training programme to these kids and become the New Warriors.[6]

Retrieved from "https://marvel.fandom.com/wiki/S.H.I.E.L.D._Trainees_(Earth-12041)?oldid=6109182"
Community content is available under CC-BY-SA unless otherwise noted.