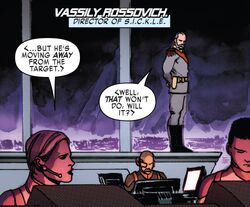 S.I.C.K.L.E. was the Russian counterpart of the United Nations' peace-keeping organization known as S.H.I.E.L.D.[1] The director of S.I.C.K.L.E. was Vassily Rossovich, the brother of Omega Red.[2]

S.I.C.K.L.E. helped the government enforce the government's anti-mutant policies, running the Stranniy Corrective Labor Camp, for instance.[3] As part of a plan to murder pro-mutant general Toma Zaslon, S.I.C.K.L.E. staged Omega Red's break-out from Stranniy and manipulated him using the nanobots injected into his bloodstream to assassinate Zaslon. The intervention of Weapon X saved Zaslon's life and freed Omega Red from S.I.C.K.L.E.'s control.[2]

Omega Red approached the S.I.C.K.L.E. Mothercarrier under the pretense of having killed General Zaslon, and confronted his brother. Feeling uneasy by Omega Red's declarations, Director Rossovich tried to activate the nanochain inside his brother's blood to no avail. Omega Red constricted him with his tentacles, prompting the S.I.C.K.L.E. agents to take action, but they were taken down by Weapon X.[4] Rossovich managed to draw out his gun and shoot Omega Red in the abdomen, freeing himself from his brother's clutches. When he reached one of the escape pods, he stumbled into General Zaslon, who was waiting for him. After she revealed her nature as a mutant, General Zaslon used a blast of ice to throw Director Rossovich out of the Mothercarrier and to his death. In the meantime, the Winter Guard had engaged Weapon X. Having appointed herself as the new director of S.I.C.K.L.E., General Zaslon declared the mutants foreigner friends of Russia and ordered the Winter Guard to stand down. Afterwards, she gave Weapon X a transport for free.[5]

It is unknown what legacy resources this organization inherited form the rogue Leviathan agency, if any.

Retrieved from "https://marvel.fandom.com/wiki/S.I.C.K.L.E._(Earth-616)?oldid=5034638"
Community content is available under CC-BY-SA unless otherwise noted.