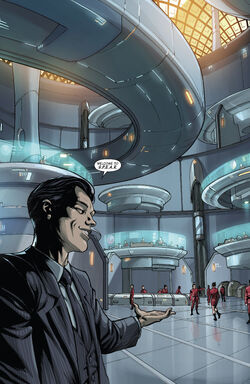 This battle will be our moment in time. When the world sets itself right. This is order restored. As it always has been, as it always should be. The shield in the west-- The spear in the East. Together we must answer this challenge, and prove ourselves worthy.

S.P.E.A.R. was a Chinese intelligence gathering organization created for homeland security. It possessed over 150,000 operatives, analysts, and overseers, sixteen airships, and a science division. Commanded by director Xian Zheng, the organization was built after the invasion by Thanos,[1] in which the super-powered team Dynasty was decimated,[2] Feeling that they needed to be able to protect themselves, China wanted to be on the same level as S.H.I.E.L.D.. So they appointed Zheng to head up the new project.

Falcon first encountered them during Gorgon's attempt to launch an attack on China using a giant dragon. When the Hand attacked their flying headquarters, the Circle, they deployed their own dedicated superhuman response team, the Ascendants.[1]

A supposedly rogue group in S.P.E.A.R. agents and scientists committed around 300 telepaths in a secure location somewhere in China to the task of making a psychic recreation of the destroyed Kowloon Walled City.[3] This simulacrum would act as an incubator for the Fury and its offspring as part of a elaborate plot by M.O.D.O.K. to infiltrate S.H.I.E.L.D.[4]

Retrieved from "https://marvel.fandom.com/wiki/S.P.E.A.R._(Earth-616)?oldid=5812984"
Community content is available under CC-BY-SA unless otherwise noted.