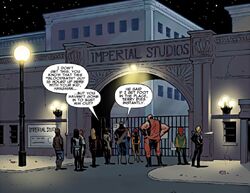 SM Studios was a Hollywood film studio owned by Namor. Namor bought the studio out boredom, using the wealth he had collected from sunken ships over the years. Namor paid the Fantastic Four one million dollars to star in a movie. Originally Namor only proposed the film in order to set trap for the team, but after they survived, Namor agreed to honor the contract and produced the film. The Fantastic Four film became an acclaimed hit.[4][5]

Despite his defeat, Namor kept his movie studio in operation for years, eventually renaming it Empire Studios.[citation needed] During a period of exile from Atlantis, the Sub-Mariner resumed operations here.[6]

During an investigation, Dwayne Taylor came to Imperial/Delazny Studios to speak with George Smith.[2]

X-Factor Investigations was lured to Imperial Studios by Bloodbath using Hangman's son, Terry. During the ensuing fight, Bloodbath killed Madrox.[7] Later, Vanora, Dormammu, and Deathlok were brought here from across the multiverse by Damian Tryp.[8][9]

Like this? Let us know!
Retrieved from "https://marvel.fandom.com/wiki/SM_Studios?oldid=5566719"
Community content is available under CC-BY-SA unless otherwise noted.