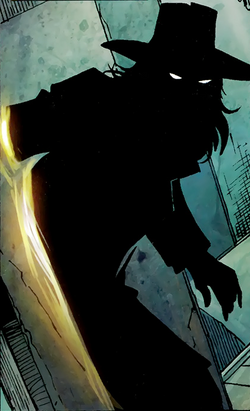 Next to nothing is known of the early life of Noir but her father Muhammad Zebari founded the “Penance Group”, a supervillain prison enforcement program. Meanwhile she became a scientist, working on the “Dark Force Project”. It was apparently here where she gained her Darkforce powers.[citation needed]

Muhammad was murdered by Joseph Duffy and his Divine Right neo-nazi gang in an attempt to take over his prison corporation. She decided to get revenge on the man responsible, and became the vigilante Noir. She clashed with Power Man and Iron Fist. She eventually avenged her father, gunning down Duffy after his last scheme was foiled by Power Man and Iron Fist. She then returned to life as a scientist.[citation needed]

Able to manipulate the Darkforce. Noir can shapeshift between a normal human form and a super-powered form composed entirely of Darkforce energy. In her darkforce form she can walk on air and fire pistols also made of Darkforce energy. These "night bullets" (titled by Victor Alvarez) can ensnare a target and even negate superhuman abilities (for exemple, Power Man couldn't summon his chi force field to protect himself from the Commedia Dell'Morte).[citation needed]

Like this? Let us know!
Retrieved from "https://marvel.fandom.com/wiki/Sa%27ida_Zebari_(Earth-616)?oldid=5561957"
Community content is available under CC-BY-SA unless otherwise noted.