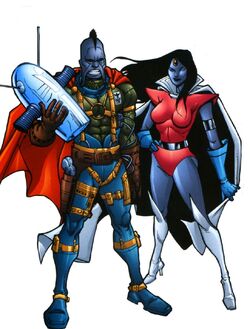 The Sagittarians were aliens subdued by the world-destroying threat Galaxy Master - they accepted bondage to this being in exchange of their civilization being provisionally spared[1] even if several Sagittarians disagreed with being executioners of other civilizations.[2]

The Sagittarians visited the Savage Land and left the android known as Umbu the Unliving there to protect a doomsday device that would destroy the Earth.[3] When Ka-Zar and the Incredible Hulk successfully ended this threat, the Saggitarians took a comatose Bruce Banner as a prisoner on their space ship.[2] The Sagittarian soldiers soon regretted their actions as the Hulk would lead a rebel group led by Princess Daydra to successfully overthrow the Galaxy Master.[1]

4.5 billion through the Sagittarian empire[4]

Retrieved from "https://marvel.fandom.com/wiki/Sagittarians?oldid=6175535"
Community content is available under CC-BY-SA unless otherwise noted.