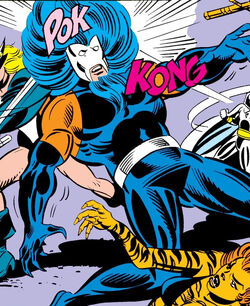 I'll get the hang of it, yet, Cat-- And when I do, your claws are gonna get clipped-- permanently!

Sagittarius one of the Life Model Decoy created by Scorpio to serve him as the second Zodiac. As a result of an attack by the Defenders, Scorpio was forced to activate his LMDs prematurely.[2] Sagittarius fought against the Valkyrie until his supply of arrows ran out, then he fled from the battle, abandoning the rest of his comrades.[3]

Later, after a broadcast by Dollar Bill which basically said that anyone could be a member of the Defenders due to its non-team status, Sagittarius led a group of super-villains on a crime spree through New York City claiming to be the Defenders. They were opposed by some of the members of Defenders for a Day and were defeated. Due to the confusing nature of the names, however, Sagittarius convinced the police to arrest both the heroes and the villains.[1] While the heroes argued with the police, Sagittarius and the other villains escaped from the scene. The real Defenders soon chased the villains into Grand Central Station and the Hellcat defeated the entire group on the subway using her psychic abilities.[4]

The entire LMD Zodiac later joined together with a mentally unstable Quicksilver to get revenge on the Avengers. Sagittarius, Aquarius, Capricorn and Pisces fought the Avengers at the "Anthill," an abandoned Sentinel base. Sagittarius was defeated in battle by the Falcon and was arrested.[5]

Once they were released from prison, the LMD Zodiac reformed and travelled to Dallas, Texas, where they killed all of the original Zodiac Cartel, except for Cornelius van Lunt and took their places in the criminal underworld. While attempting to rob a group of businessmen gathered at a cattle auction in Wichita, the Zodiac were opposed by the West Coast Avengers. Sagittarius battled Hawkeye and was hit in the chest by one of Hawkeye's arrows, destroying him, though Scorpio used the Zodiac Key to rebuild Sagittarius in the form of Hawkeye.[6]

This "Hawkeye" LMD was discovered and destroyed by Mockingbird and an undercover LMD female-version of Leo dressed as Tigra.[7]

Sagittarius was an expert archer.

Sagittarius was armed with wrist-mounted bows, which he used with various trick arrows like flame arrows.

Like this? Let us know!
Retrieved from "https://marvel.fandom.com/wiki/Sagittarius_(LMD)_(Earth-616)?oldid=5461892"
Community content is available under CC-BY-SA unless otherwise noted.