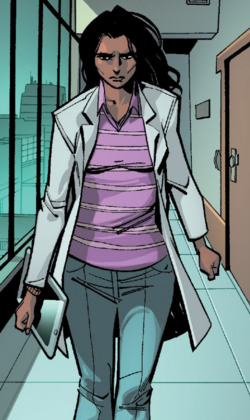 Sajani Jaffrey. Expert in xenotech, biology, and chemistry. Definitely worth keeping despite her attitude.

Sajani Jaffrey is the ambitious, ruthless, greedy, and rude co-worker of Peter Parker at Horizon Labs and later his employee at Parker Industries. She is the creator of the artificial metal called Reverbium, a form of Vibranium. She strongly dislikes Peter's easygoing philanthropist attitude, and has attempted to undermine his control of the company in the past by sabotaging Peter's projects and colluding with super vllains like the Black Cat and the Ghost. However, Peter learned of Sajani's actions and told her in no uncertain terms that he would not allow it to happen again.

Following Parker Industries's rise as a global conglomerate, Sajani became the head of the company's European branch, and continued working with Anna Maria Marconi behind Peter's back on their nanotech programs.[1] Sajani was fired by Peter after the consciousness of Otto Octavius, which was secretly housed inside Sajani's and Anna Maria's robotic assistant the Living Brain, used Sajani's nanotech to hack into London's CCTV systems, and Parker tracked the nanotech back to Sajani.[2] As a result, Peter fired her despite her protests of innocence, giving Anna Maria her former position.

Like most of her fellow co-workers, Sajani is a prodigy and possesses great intelligence.

Like this? Let us know!
Retrieved from "https://marvel.fandom.com/wiki/Sajani_Jaffrey_(Earth-616)?oldid=4043752"
Community content is available under CC-BY-SA unless otherwise noted.