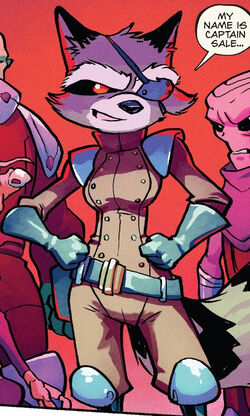 No one calls me a raccoon!

Sale is a genetically-modified Halfworlder that resembles an Earth raccoon. Like most of her kind, she had been wandering the cosmos searching for clues to her mysterious past, and eventually became captain of her own ship. When she learned that Rocket was close to finding a book that may reveal their species' past, she trailed him to Tower City before pulling him onboard her spacecraft. Using a key she had in her possession, she was able to open the book and have Rocket read it, only for him to abandon his quest for knowledge when the portions he read were too odd and unnerving, and gave the book to her.[1]

Like this? Let us know!
Retrieved from "https://marvel.fandom.com/wiki/Sale_(Earth-616)?oldid=5496088"
Community content is available under CC-BY-SA unless otherwise noted.