Samantha McGee was a charter pilot, who was in hock up to her eyeballs, when she took a charter to fly Tony Stark up to Nunavut Territory in Canada to an archaeological dig. There they discovered the Temple of Balthakk, where inside, she stumbled across the Brazier of Balthakk, and touching it, she became Inferno, the Exemplar of Balthakk, a mystic entity that had entered into the Wager of the Octessence with seven other mystic entities.[2]

Together with the other Exemplars, they defeated the Avengers and the Juggernaut but in the end, Bedlam regaining her lost humanity used her mental powers to return the other Exemplars to their original mental state, free from their mystic benefactors influence/control. Panicking, they immediately left the Avengers. It is uncertain if they continue to retain their original mental state or if the mystic entities would again gain control of their avatars.[3]

Generates heat and light for powerful blasts and flight.

As Samantha McGee, she is a licensed airplane pilot.

undetermined but assumed to be above average human strength.

Even before she was empowered by Balthakk, Samantha absolutely hated the cold. 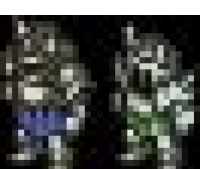