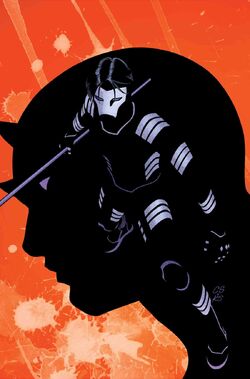 Sam Chung was born in China to his mother Lu Wei, a rural farmer. When Sam was still young, he and his mother moved to the city. Sam was enrolled in an acrobatic school, and became an excellent gymnast. A few years later, Lu sought help from a people-smuggler to illegally enter the United States of America. Later on, Lu had another child named Hannah, who was a legal citizen unlike Sam.[3] When Sam was 12, he began putting together a design for an invisibility suit. [4] He kept working on it throughout most of his childhood.

Having grown into adulthood, Sam worked fourteen hours as a janitor at Columbia University to pay rent and sustain him and his sister after their mother left them behind to join the Church of the Sheltering Hands.[5] His job served another purpose, as it allowed Sam to develop his innate genius intellect, convincing professors to let him audit their classes and use their labs in the middle of the night. Using the resources at his disposal, Sam developed his own invisibility suit.

Though Sam initially intended to file a patent for his invention, he backed down in the idea, fearing his status as an illegal immigrant could easily lead to bigger companies stealing his invention or taking advantage of him. Instead, he put the suit to use as a vigilante in order to protect the streets of Chinatown as a hero called "Blindspot". While out on patrol one night, he ran into Daredevil fighting thugs in Hell's Kitchen. Startled, Sam fell over the ledge, but Daredevil catches him. Aware he would need practice as a vigilante, he sought Daredevil's help to train him as a fighter.[4]

The Church of the Sheltering Hands

The life of Sam and his mother, Liu Wei, changed drastically with the appearance of crimelord Tenfingers, who lured Liu to become a member of his Church of the Sheltering Hands. Lu Wei vouched for Sam to become a member as well, and the Church extended him an invitation. Sam accepted, and began to work for the temple solely in order to investigate their nefarious secret activities, with the intention of helping Daredevil take them down. After discovering the connection between Tenfingers and the dangerous cult of ninja known as The Hand,[6] Sam confronted his mother to convince her to leave the Church for her safety, revealing his secret identity to her in the process.[7]

When the undead warrior of the Hand, the Fist, attacked the Temple of the Sheltering Hands, Tenfingers ordered his lieutenants, including Lu Wei, to kill any witnesses. Blindspot confronted Tenfinger's men and his own mother to protect the innocent followers of the temple. Wei ultimately decided to turn on her teammates and kill them to let Sam and the innocents escape. However, she warned Sam that he should consider her dead to him.[8]

Sam's right arm was broken when a meeting between Daredevil and Elektra went awry, as she had been brainwashed to believe her non-existent daughter had gone missing.[9] Because he had to take days off from work due to his injury, Daredevil offered Sam to work as an assistant for his civilian identity of lawyer Matt Murdock.[10] Even after his arm was healed, Sam continued working for Murdock.[1]

Once he got back in the game as Blindspot, Sam was lured to a warehouse where he discovered a mural made of human blood,[1] the first of many works of "art" created by the twisted Muse.[11] As Blindspot, Sam pursued Muse when he attacked a courthouse and kidnapped a judge and took him to the sewers together with a councilwoman and two police officers.[12] Even though he managed to get Muse's victims to safety, Sam was kidnapped and taken to Muse's garret. Daredevil managed to track both of them with his senses. Unfortunately, as soon as he arrived to rescue Sam, Muse gouged his eyes out and then escaped.[13]

Following Muse's capture, Sam was taken to St. Luke's Presbyterian Hospital, where he remained sedated.[14] Desperate to restore Sam's sight, Lu Wei took him away and travelled to a Hand temple in China, where she traded her soul to the Beast in exchange of restoring Sam's sight. Sam become a disciple of the Hand afterwards.

Wei then had Sam lure Daredevil to the temple with a false call for help, so the hero could take Lu's place in the bargain with the Beast. Sam would learn of Daredevil's true alter-ego as Matt Murdock while holding him prisoner. While escaping with his mother, Sam snapped out of the Hand's dark influence and had a change of heart, deciding to rescue Daredevil instead. Lu reluctantly helped his son confront the Hand and was killed by the Beast. The demon then abruptly teleported the temple away, leaving Sam and Matt alone. Both returned to the United States afterwards.[3]

When Muse escaped from custody and started a new artistic campaign which resulted in the slaughter of six police officers,[15] Sam ignored Matt's suggestion that he didn't go after Muse alone, and destroyed one of the villain's murals to draw him out.[16] Blindspot was effortlessly overpowered by Muse, resulting in the Beast reaching out to Sam to lend him its power. Muse accepted the Beast's gift and managed to defeat Muse. However, Sam refused to repay the Beast by killing Muse, and ended rejecting the Beast. Following his defeat, Muse committed suicide by walking into a pile of burning debris. In retaliation for Muse's rejection, the Beast launched a massive assault on Manhattan which paralyzed the city. Matt Murdock had recently started working as deputy mayor for Wilson Fisk, so when Fisk was critically injured during The Hand's siege, Matt temporarily became the mayor of New York City.[17] Sam sought Matt's help at City Hall, and worked with him in fighting off the ninja invaders.[18]

Near the end of the conflict, the Beast personally approached City Hall to claim Sam in exchange for leaving the city alone. Sam prepared to hand himself over to the monster, but police commissioner Nalini Karnik stopped him. The Hand attacked City Hall, but they were intercepted by Daredevil, a handful of vigilantes and the Ordo Draconum. The ninja clan was defeated during the subsequent fight when Daredevil stabbed the Beast with a magical sword and it vanished in a flash of light. Following the end of the conflict, Blindspot was eyed by the Ordo Draconum for recruitment.[19]

After Matt suffered a near-death when hit by a truck, Sam visited him at the hospital. He was surprised to hear Matt expressing no intention of putting on the Daredevil costume again and advised Sam to do the same before he ended up like him. Sam left, hurt and angry.[20] Sam's subsequent activities and whereabouts are unknown.

Genius-level Intellect: Samuel developed a suit that allowed him to become completely invisible to the naked eye.[4]

Skilled Martial Artist: Under Daredevil's tutelage, Samuel has become an excellent hand-to-hand combatant, being able to defeat several Tenfingers's henchmen.[21][6] He refined his fighting skills even further once he became a disciple of the Hand.[3]

Skilled Acrobat: Sam spent his entire childhood training in gymnastics, and was a notable student.[3]

Limited Sight: After losing his vision when Muse gouged out his eyes,[13] Blindspot was granted new eyeballs through the Hand's magic. However, for Sam "everything looks so dark."[3]

Like this? Let us know!
Retrieved from "https://marvel.fandom.com/wiki/Samuel_Chung_(Earth-616)?oldid=6423792"
Community content is available under CC-BY-SA unless otherwise noted.