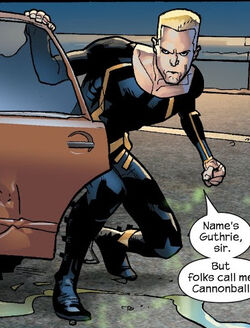 Cannonball was a member of Emma Frost's Academy of Tomorrow, a somewhat more pacifistic alternative to the X-Men. He was the newest member.[1]

When fellow student Lorna Dane was framed for murder and thus imprisoned in the Triskelion, her boyfriend, Alex Summers, recruited a strike team. With Sam and Alex was Sunspot, Douglas Ramsey and Northstar. During the trip to New York, the team became lost and was ambushed by the X-Men. Cannonball initially literally swept Wolverine off his feet but was soon defeated.[2]

It is mentioned that Samuel was killed by Madrox copies.[3]

Like this? Let us know!
Retrieved from "https://marvel.fandom.com/wiki/Samuel_Guthrie_(Earth-1610)?oldid=5077484"
Community content is available under CC-BY-SA unless otherwise noted.