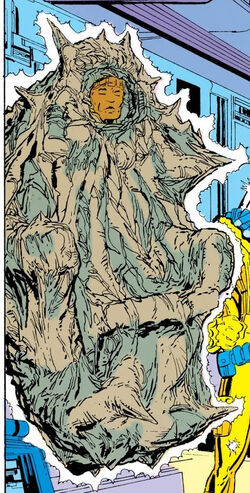 As a child, Samuel LaRoquette was born into an urban area, and his family did not have many opportunities to take trips into the country or expand his horizons. This seemed to fuel young Samuel's mind in making his own opportunites for exploration. His favorite plaything had been an old refrigerator without a door found discarded in an alleyway near his tenement. Using this, he imagined it a vessel where he was an astronaut or a submarine captain, et cetera, exploring the unexplored. This was common for boys his age, but as he grew up he refused to abandon his ideas unlike many of his friends. As a teenager Samuel studied much about terrain, as well as famous men such as Esteban, Ponce de Leon and Fridjof Nansen. As a full-grown man Samuel Laroquette "conquered" many different parts of Earth to include desert, tundra, ocean, snow, and so forth, surviving the worst of Earth's ecosystems. He then became a college professor, where he gave lectures about his experience and survival in these environmental areas titled "Man and His Worlds". This was well received among scientists, climatologists and geographers, and bolstered LaRoquette's academic reputation. [citation needed]

He later joined Argo Industries but his pride and hard-nosed attitude brought constant conflicts with his superiors. His last expedition resulted in the death of two team members when an earthquake struck. His boss blamed him for their deaths and he ended punching him out too. Samuel later was recruited by Bruce Banner to be part of his Hulkbusters and got reunited with Carolyn Parmenter.[citation needed]

When Carolyn was killed in a training mission that was meant to assault Dr. Leonard Samson, LaRoquette swore vengeance against anything with gamma-irradiated blood. [citation needed]

Though having to work with Dr. Samson as part of a deal with S.H.I.E.L.D., he still wished to kill both the Rick Jones version of Hulk and the Bruce Banner version.[citation needed]

When Nick Fury shut down the Hulkbusters, the Leader offered him and his former teammate Craig Saunders, Jr. to help him to defeat the Hulk.[citation needed]

Leader changed LaRoquette into Rock and Saunders into Redeemer. Both men formed Riot Squad which became the first line of defense of Freehold which was a town of gamma-spawned individuals located under the Canadian ice.[citation needed]

During the Acts of Vengeance Rock joined the Jester's Assembly of Evil and fought the Avengers. During the battle, Thor strikes Rock with his mighty hammer and Rock's exterior shell shatters into pieces. LaRoquette laid nude and was ecstatic that he was free from his stony imprisonment. LaRoquette's happiness was short-lived when the stone pieces merged back to his body and he was transformed back into the Rock. LaRoquette was so upset he fled while the rest of his teammates were defeated by the Avengers.[citation needed]

LaRoquette is a survival expert with experience in many harsh climates and terrains.

As a Hulkbuster, LaRoquette had access to advanced technology such as battlesuits, planes and large land vehicles outfitted with weapons powerful enough to threatean the Hulk. As Rock, LaRoquette is permanently bonded to a shape-shifting, rock-like exoskeleton that responds to his thoughts. The exoskeleton grants him immense durability, superhuman strength (Class 25) and flight. Rock can shape the exoskeleton into various forms, including a spiked form and a giant human shape over 30 feet tall. Because Rock is mentally linked to his exoskeleton, any harm done to it will also be felt by Rock.

Like this? Let us know!
Retrieved from "https://marvel.fandom.com/wiki/Samuel_John_LaRoquette_(Earth-616)?oldid=5745212"
Community content is available under CC-BY-SA unless otherwise noted.