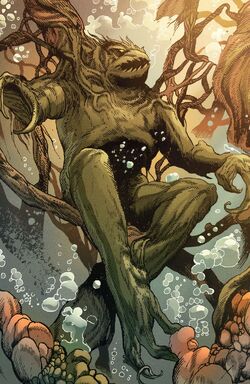 Do not speak to the Plant Man of power! Mine was the genius that gave the semblance of life to unthinking plant tissue! There can be no greater power than that!

Samuel Smithers was born in London. Raised an orphan, Smithers went to work as a lab assistant to a well-known London botanist who was exploring the low-order mental activity of plant life. After ten years, the botanist died and Samuel moved to the United States, in hopes of continuing his work: an invention to make plant life smart enough for human beings to speak with and understand.

He did not have the proper education needed so Smithers went to work as a gardener in Glenville, Long Island, New York. He worked for Mr. Evans, who eventually fired him because he was spending more time working on his invention than gardening. Not long after, lightning struck his plant ray gun, giving it the power to control and animate all plant life.[2] It was revealed later that this incident occurred because of the intervention of the plant-like race H'ylthri from the mystical city of K'un-Lun.[3]

He made a disguise and called himself Plantman. Smithers then thought out a suitable revenge for his former boss Mr. Evans, framing him for robbery. However, Evans' daughter Dorrie was dating the Human Torch, who thwarted Plantman and cleared Evans' name. Even though the Human Torch destroyed Plantman's ray gun, Smithers escaped.[2]

He then created another ray gun, even stronger than his first. He challenged the Human Torch to a duel in the botanical garden, but was defeated and taken to prison.[4] Smithers allied himself with the Maggia and other super-powered criminals and unsuccessfully fought the X-Men,[5] as well as Captain America (and his partner the Falcon).[6]

Later, he, along with the Porcupine and the Eel attended the Celestial Mind Control Movement established by Nebulon in the hopes of turning around their failing criminal careers. Smithers quickly left, as he thought that the movement was nothing more than a fraud. He devised a plan to kidnap millionaire Kyle Richmond, who was in hospital recuperating from brain surgery, and ransom him for fifty million dollars.[7] He was opposed by Richmond's teammates, the Defenders, and was soon forced to retreat. He decided that he couldn't do it alone and returned to the Celestial Mind Control headquarters. When he saw his friends who were brainwashed by the movement, he changed his mind and wanted to leave. This time, however, Nebulon blasted him unconscious.[8]

Smithers later branched out on his own to become the mastermind of a larger criminal operation. He developed his "Pretty Poison" which he field tested on his longtime nemesis Captain America. The toxin placed the Captain in a debilitating, life threatening coma. The Falcon and Spider-Man were able to track down and defeat Plant Man, acquiring and administering the antidote just prior to Captain America succumbing to the poison's effect.[9] Plantman also clashed at various times with the Micronauts,[10] the Avengers,[11] Alpha Flight,[12] Hawkeye,[13] the Fantastic Four,[14] and the She-Hulk,[15] amongst others.

Smithers more closely allied with the H'ylthri when he worked with their representative Sssesthugar. The two worked to bring the H'ylthri to Earth to conquer mankind and set up their species as the dominant new world order. However, Smithers was betrayed by the H'ylthri and left for dead. He gave his ray gun to Namorita who was able to use it and stop the H'ylthri invasion.[16]

Smithers was captured and imprisoned as part of a group of super-powered inmates who were regularly transferred between maximum security locations, in an effort to prevent their allies from breaking them out. When he and the other members of Chain Gang 421-011 were in transit from Seagate Prison to their next destination, an earthquake caused by Graviton levitating Manhattan Island wrecked their convoy and freed them.[17] Smithers and his fellow inmates, Hawkeye, Cottonmouth, and Mentallo (mentally inhabiting the body of Headlok) were forced to work together to escape as their cybernetic manacles prevented them from overtly using their powers or traveling more than fifteen yards from each other.[18] After the current team of Thunderbolts were seemingly killed in Battle with Graviton, Songbird tracked down the members of the escaped Chain Gang. While Cottonmouth and Mentallo were imprisoned by SHIELD, Hawkeye and Plantman joined Songbird to form a new team of Thunderbolts.[19] The group was soon rounded out by several defectors from the Masters of Evil.[20] Songbird revealed that Plantman had been spared imprisonment because he was the key to activating a mystery weapon that the recently deceased Justin Hammer had left behind. While a member of the Thunderbolts, Smithers adopted the codename "Blackheath."[1]

During his tenure with the Thunderbolts, Machinesmith studied Smithers and revealed that his evolving powers and now rendered his body over 40% plant matter.[20] When the Thunderbolts confronted the Crimson Cowl, Smithers was captured and experimented upon to reveal the secrets of the bio-toxin in his body. During this procedure, Smithers' spirit connected with the energy field, the so-called Verdant Green, the embodiment of the Earth's biosphere. The Verdant Green pointed out that Smithers could release the toxin, removing humanity from the biosphere and allowing the plants to flourish as in its pre-industrial days. Instead, Smithers chose to release an antidote for the toxin into the atmosphere and appeared to die in the attempt.[21]

The Thunderbolts ultimately defeated the Cowl and her Masters of Evil, but they were confronted by the Elite Agents of S.H.I.E.L.D. who wanted the remains of Blackheath's body.[21] Finally, Smithers was able to revive himself by absorbing the moisture from the villain Hydro-Man, leaving Hydro-Man desiccated.[22] The Thunderbolts were aided against S.H.I.E.L.D. by the arrival of Citizen V, who needed the team's immediate help with his agency's ship -- the engines of which were made of alien technology that had begun distorting, threatening to suck the Earth into the null space of a white hole. In so doing, the Thunderbolts encountered the original Thunderbolts, who emerged from the void after severing the alien ship's presence from where they had been trapped on Counter-Earth. The two teams of Thunderbolts combined forces to plug the void and shunt the alien ship from Earth, similar to the manner in which Baron Zemo's team stopped the threat on Counter-Earth.[23]

After much discussion, most of the costumed heroes and villains chose to part ways. Smithers elected to join the Thunderbolts, hoping that their new mission, to rule the world in order to save it, would closely match his own goals of protecting the Verdant Green from humans. He increasingly began to lose touch with his humanity, becoming more motivated by his connection to the Green.[24] Following a battle with Moonstone where the Thunderbolts and Avengers teamed up, the members of the Thunderbolts agreed to go their separate ways, and Smithers agreed to return to prison, hoping to reconnect with his human nature that he felt he was slowly losing.[25]

In the wake of World War Hate, Plantman attacked Los Angeles to get back at humanity for polluting the world. When a group of Avengers intervened, they turned on each other due to the psychic influence of Red Onslaught. Platman was defeated by Iron Man, whose armor made him immune to the telepathic attack.[26] Plantman would eventually resurface during the Empyre's invasion of Earth.[27] Having completely rejected his humanity, Smithers allied himself with the invading Cotati, a plant-based alien species, and agreed to help them in their goal to exterminate all animal life in the planet. Reaching new heights with his power due to the Cotati, Plantman infested the Central Park Reservoir with a membrane of fungus under which he grew an army of Sprout Soldiers. When he was confronted by a group of three heroes that consisted of the Vision, Luke Cage and Doctor Nemesis, Plantman went on a rampage,[28] but was stopped by the combined efforts of the heroes.[29]

Plant Manipulation: As Blackheath, Samuel Smithers' body seems completely composed of vegetable matter, allowing him superhuman strength and resistance to injury. He can also alter his shape and elongate his body. He is capable of mentally communicating with the Verdant Green, the psychic embodiment of Earth's biosphere, and he can mentally command plant and vegetable matter.

Despite his lack of formal education, Smithers is a brilliant botanist, biochemist, and inventor.

The Plantman would also use a unique humanoid plant life of his own creation called “simuloids,” creatures capable of mimicking human life and possessing rudimentary artificial intelligence. (Many times he has fooled the authorities or escaped capture by using a plant-duplicate of himself. Another simulacra even developed its own identity as Terraformer.) He has created armies of such plant-life, including at least one 100-foot tall tree-man. Moreover, he would equip these simuloids and personal duplicates with weaponry that could launch poisoned thorns or spores.

A ray gun that was invented by Smithers that could increase the intelligence of plants. This was altered by what he assumed was a freak accident which allowed him to control the plants. The original was destroyed during his battle with the Human Torch.[2]

As Blackheath, Smithers carries no weapons. As Plantman, he would often employ guns that fired a “vege-ray,” a type of unique energies that could stimulate rampant plant growth and animate plants according to his whims. These plants could remain under his control for hours. At one point, he also added wrist-mounted blasters which would fire razor-sharp thorns at this opponents.

Like this? Let us know!
Retrieved from "https://marvel.fandom.com/wiki/Samuel_Smithers_(Earth-616)?oldid=6076025"
Community content is available under CC-BY-SA unless otherwise noted.