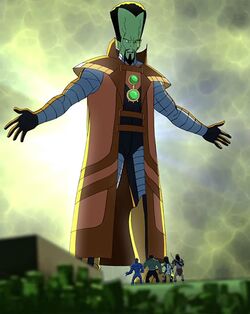 The Leader became the Hulk's arch nemesis after being exposed to the same gamma radiation that created him. With the massive intellect Leader possesses he has become obsessed with destroying Hulk.

It was revealed that the Leader was the one who supplied the mind-control technology to Annihilus. At the end of the episode, it was shown that he had planted Skaar on the Agents of S.M.A.S.H. to learn about them, in exchange for Leader telling Skaar about his past.[1]

Into the Negative Zone

Leader has Blastaar use special snakes from the Negative Zone in order to petrify the Agents of S.M.A.S.H. Hulk teams up with Thing to enter the Negative Zone in order to find the snakes and get the venom for an antidote. When Hulk ends up captured, Leader revealed that he had been watching Hulk's web show where it was revealed that he confiscated Annihilus' Cosmic Control Rod following his failure, supplied Sauron with the weapons for his plot and tipped off Laufey on where he can find Ymir in exchange that he gains equal control of the world with them. Leader then places a chip on Hulk so that he can go on a rampage upon being released back on Earth. Hulk manages to break free and beat up Leader. Before Hulk can continue beating up Leader, Thing manages to stop him so that they can get the antidote to the Agents of S.M.A.S.H. After the Agents of S.M.A.S.H. are cured, they find that Hulk has Leader in their cell.[4]

Seemingly those of the Samuel Sterns of Earth-616.

Seemingly those of the Samuel Sterns of Earth-616.

Like this? Let us know!
Retrieved from "https://marvel.fandom.com/wiki/Samuel_Sterns_(Earth-12041)?oldid=6077610"
Community content is available under CC-BY-SA unless otherwise noted.