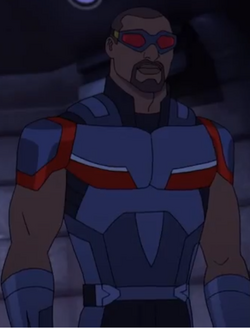 Sam Wilson was recruited into S.H.I.E.L.D. and was one of the best recruits in the S.H.I.E.L.D. Training Program. He worked secretly with Tony Stark aka Iron Man, who took him under his wing. He had access to the Hall of Armor and was welcome to use the equipment in a time of crisis.

After Captain America is vaporized by the Red Skull, Iron Man activates "The Avengers Protocol," calling the team through a hologram device to a meeting. The heroes selected by Stark are Falcon, Thor, Hawkeye, Hulk, and Black Widow. Sam left the training program mid-session, much to the annoyance of Nick Fury. He runs to the Hall of Armor and selects Project Redwing. The Avengers fly to the Hydra Base in Antarctica, and learn that Captain America is still alive, and was unreported by M.O.D.O.K. to undergo a body change with his mortal nemesis the Skull. He arrives in the Falcon armor and is ordered by Iron Man to knock Captain America, which he does, despite protesting. A massive battle ensues, and they end up rescuing Captain America. After his defeat, the Skull strips Tony of his Arc Reactor and Armor. Now clad in the armor, he calls himself the "Iron-Skull". As Tony lies there dying, he asks Captain America for help.[1]

The team find the Quinjet blown to pieces. The only option is for them to all squeeze into the S.H.I.E.L.D. Flying Car. They rush him back to the Avengers mansion, where Sam hooks Tony up to machinery to restart his heart. M.O.D.O.K. uses special nanobot that can make the Avengers turn on each other. During the Sparring session, the nanobots attack and infect them. They all battle each other with only Tony left uninfected. He cures his allies using a concentrated EMP. They find the Skull, who was trying to steal Tony's tech; he is stopped, but still has time to teleport away. It is then that Tony discovers the Mansion's reactor was about to blow. The team must work together to stop the explosion. They create a vortex shooting the explosive energy into the sky. The team now move to Stark Tower where they set up home as now a official team.[2]

Ghost of a Chance

The Avengers battle Space Phantoms, extra-dimensional beings who can replicate them right down to cellular level. The creatures replace them one by trapping them in Limbo. But Sam is able to save the team, and working together, they take down the alien invaders.[3]

The Serpent of Doom

The Avengers battle Doctor Doom as he uses the Asgardian weapon Cudgel to release the Midgard Serpent, with hopes of using it to conquer the globe. The creature is too powerful, and would continue to grow until it consumes the Earth. After a battle with the Avengers, he and the creature are banished to the Realm Below using the extra-dimensional portal used by Ulik.[4]

The Avengers battle Dracula, who had kidnapped Black Widow and turned her into a Vampire. They travel to Transylvania and confront him at Castle Dracula. He reveals that he was an ally of Captain America during World War II, working together to defeat the invading Hydra forces. He wants the Super-Soldier Serum in Cap's blood, which will allow him and his subject the ability to go out in the sunlight. During the fight, he drinks the Hulk's blood, absorbing his powers, and turning the Hulk into a Vampire. However, the Hulk's gamma cells act like tiny suns, and he burns away the infection, which also weakens Dracula. In his defeat, his minions drag him underground to safety.[5]

He was captured along the other heroes by the Collector but was soon freed by She-Hulk and Skaar.[6]

Justin Hammer sends a video message to the Avengers, inviting them to come to his company, so he can show off his new invention: The Super-Adaptoid. The Avengers make quick work of the Adaptoid, prompting Hammer to rebuild the robot and send it to Avengers Tower to attack the team. After a lengthy battle, Captain America and the Avengers manage to destroy the Super-Adaptoid again.[7]

When the Avengers faced against the newly formed Cabal, they were trapped and immobilized on the leaders ship, the team was then dispersed across time and space. After the Avengers disappeared, Sam ended up in a few years into the future in which Kang had deprived people of New York of technology but was trying to save the Earth from a Singularity caused by his excessive time traveling. Without Tony Stark to help him, he decided to go for the second brightest mind on Earth after Stark's Falcon.

Samuel got a new suit and spent next few years in the future maturing and learning new combat skills under Kang's tutelage and fought against anyone who possessed Kang like old Red Hulk. Falcon eventually met with Wasp and Vision who came to this time in hopes of finding him. Sam brought Vision to Kang's castle in need of his technological abilities to stop the singularity, they nearly failed when Wasp and Red Hulk interfered but were able to work together to succeed in their mission. However Kang revealed that he plans to used the energy from the singularity that would allow him to time travel without consequences, Sam tries to appeal to his former teacher but rejected his offer, little did he know Sam had already placed tech dampeners as a contingency for his betrayal. Together Falcon, Vision, Wasp and Red Hulk defeated Kang and freed the people of that time period from his conquest, soon Sam was then brought back to his original time with Vision and Wasp.[8]

Upon all the Avengers safely return home, they found their world now covered in ice under the rule of Loki.[9]

Seemingly those of the Sam Wilson of Earth-616.

Super-Genius Intelligence: Sam's most notable skill is his intellect, which has proven useful at times, even learning more from the likes of Tony Stark. Such as being smart enough to strategies multiple contingencies on how to defeat his targets, showing his skills in pinpointing their weaknesses. Sam is also with machinery such as working with computers, building devices and a being able to track down the Infinity Stones. His intelligence had been praised by those such as Nighthawk, Kang and even Tony Stark who implied Sam to possibly be smarter then himself and has been shown to out smart those notable of high intellect.

Master Martial Artist: Even before joining the Avengers, Sam already been trained under S.H.I.E.L.D.. Since then Sam has been trained by Captain America in multiple martial arts making him a dangerous combatant. Sam had also received training from the tutelage of Kang, having learned fighting styles that haven't even been invented yet.

Master Tactician and Strategist: Having been mentored by both Iron Man and Captain America, Sam has shown to be capable of leading the Avengers when the two when missing. Sam planned out ways for his team on how to individually defeat the members of the Squadron Supreme.

Shield Fighter: While originally shown to be terrible at wielding Cap's shield, Sam has show to have slightly improved since then.

Overly Modest: Sam's most notable weakness would have to be his over sense of modesty, at times doubting his own skills or that he's anything special, being surprised at what he's capable of. Though over time, Sam has grown to have more confident in himself and his capabilities.

Like this? Let us know!
Retrieved from "https://marvel.fandom.com/wiki/Samuel_Wilson_(Earth-12041)?oldid=6010707"
Community content is available under CC-BY-SA unless otherwise noted.