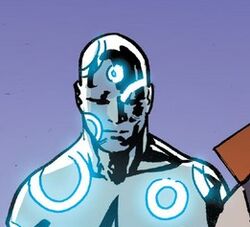 As leader of the Children of the Vault, Sangre was a ruthless man that had the ability to produce bubbles that surrounded his enemy's head, leading to eventual suffocation as an obvious application of his aquakinetic ability. While he normally worked in the background, he was an intelligent leader and well-respected by his teammates. He took his work very seriously and was most concerned with the survival of his race. After Serafina revealed herself to the X-Men, Sangre decided to launch an attack on the group. When the mutants fought back, they foiled the plan to destroy the Xavier Institute, and Mystique shot Sangre with thermite bullets, which turned the water in his body to air when they exploded, killing him.[2]

Either surviving or found a way to come back to life, Sangre and the other Children of the Vault moved into the Vault in Ecuador built within the ruins of the Wild Sentinel Factory, whose temporal nature was always changing. The X-Men learned of the Vault's existence and sent Wolverine, Synch, and Darwin to capture Serafina. Unfortunately, as soon as the three entered the Vault, they lost touch with the X-Men.[1] The Children of the Vault fought the trio with Synch seemingly killing Sangre using the pyrokinetic powers of Fuego.[3]

Sangre was later resurrected by the City, the artificial intelligence that ran the Vault, through cloning and enhanced as a third-generation of the Children.[4]

Bubble Creation: Sangre could form bubbles of water from the moisture in the air and could direct them. He used this ability to form bubbles around his targets head, therefore suffocating his victims by blocking out oxygen.[citation needed]

Watery Body: He had a watery body that made him hard to injure.[citation needed]

Like this? Let us know!
Retrieved from "https://marvel.fandom.com/wiki/Sangre_(Children_of_the_Vault)_(Earth-616)?oldid=6431841"
Community content is available under CC-BY-SA unless otherwise noted.