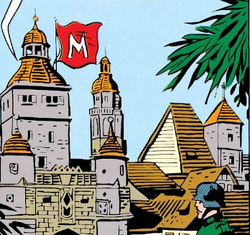 Santo Marco, officially known as the Republic of Santo Marco, is a sovereign state on the northeastern Atlantic coast of South America. It is bordered by the Atlantic Ocean to the north, French Guiana to the east and Brazil to the west and south. Santo Marco has a population of approximately 198,000, most of whom live on the country's north coast, in and around the capital and largest city, Santo Marco City.[1]

Santo Marco was a tiny colony founded during the Spanish colonization of South America, in the early 16th century. The colony was later taken over by Portuguese, Dutch then French domination.[1]

In the early 19th century, General Alejandro Montalva assumed power and achieved independence of the country.

After decades of Montalva's cruel dictatorship, the people of Santo Marco rebelled and overthrew his corrupt regime.[1]

The country became a democratic republic, and Felix Navidad was elected for president, and ruled peacefully for many years.[1] His government nevertheless wanted to kill the mutants.[4]

The country was taken over and Navidad's government overthrown by the Brotherhood of Evil Mutants (by creating an illusory army[5][1]. The Brotherhood then formed a real army of Santo Marcans[5] and employed a small army of mercenaries, while they briefly occupied the country[6] which they declared a mutant homeland.[7] During that time, the people were even afraid of leaving their homes.[4]

During a battle with the X-Men, Magneto chose to abandon the country. He set a nuclear bomb to explode, in hopes of killing the X-Men and everyone else left behind. The bomb was secretly disarmed by Quicksilver. [5][1][6][4]

Upon Magneto's departure of Santo Marco, head of the Santo Marco Armed Forces General Luis Augustine assumed control of the country, plunging it into another era of dictatorship, and prompting the formation by outspoken activist Carlos Zapatero of the Popular Front for Santo Marco.[1]

Tension grew, with television talking about tribal grudges and atrocities on both sides of the conflict. At least since the beginning of the Taino Rebellion, former soldiers imprisoned for murder or rape (such as sergeant R. Belasco) were released and reinstated, torture and murder were performed in prisons such as the Coahiba Detention Center, mass murders were performed, such as the burning of 312 refugees in the Iglesia de Cristobal, or the multiple killings of the Santo Marco Armed Forces Death Squad 832.

Despite the presence of international observers, including United Nations Blue Helmets, president Augustine had the army to gather citizens to stadiums to use a retrofitted Sentinel to gene scan them, separating out everyone from the same tribe as the main rebel leaders, before performing mass killings. War Machine foiled such mass murder,[8] butchering at least twenty-six Santo Marcan soldiers. That attack war part of the War Crimes and Crimes against Humanity charges carried out by the International Court of Justice of The Hague against War Machine, and Santo Marco moved to extradite him as soon as the trial would be over.[3]

At some point and in unrevealed circumstances, Augustine was eventually replaced by President Emilio Duarte.[9]

For years, the U.S.A. attempted to have him killed, sending soldiers who were at each occasions either captured (including Nuke) or killed.[10]

The X-Men worked with the opposition party to defeat President Duarte's new anti-mutant bill. At the same period, Suncorp Properties expelled fishermen all along the northern shore of Santo Marco to built their resort.

At that time, Storm intervened to stop a tsunami over such a village, but was instant later confronted to Suncorp's army who inflicted on her their bigotry. They returned but were defeated and delivered to local authorities, prompting President Duarte to swore to investigate. Expelled fishermen all along the northern shore soon kicked out Suncorp guards and reclaimed their villages.[9]

At some point, Duarte bombed the capital (causing the evasion of many zoo animals).[11]

After Duarte's fall, the country went into chaos (save for a stretch along the coast defended by the mutant Jorge Santiago), and anti-mutant bigotry didn't disappeared.[11]

At some point and somehow, Duarte returned as President.

Using Nuke's technology, the Santo Marcan Armed Forces created the Nuke Platoon, and had them track down "the mutants and the mutant lovers and everyone else poisoning this great country". Killing and capturing mutants, it prompted the intervention of the mutant fighters team Weapon X,[10] who defeated the Nuke Platoon. The original Nuke was freed by Weapon X in the process. During the march of the mutants on Santo Marco City, demonstrating the Nuke platoon prisoners, and demanding that the National Guard surrendered Duarte for him to be judged for his crimes against mutants and the corruption of his regime, Nuke infiltrated Duarte's office and assassinated him before the eyes of the Santo Marcans (and before cameras).[12]

Santo Marco is a little country of South America bordering French Guiana by the west and the Pacific Ocean at north and east.[1]

On another statement, Santo Marco was stated to be an island nation.[6]

The major languages in Santo Marco are English, Spanish, Portuguese and French.[1]

One of its bank is the National Bank.[10]

The major resources are coffee, cocoa, timber and tourism.[1]

The defense of Santo Marco was assured by the Santo Armed Forces, including the Santo Marco Army and Navy,[1] as well as the National Guard.[12]

At the point Magneto attacked, he stated that Santo Marco had no force to oppose him. Himself formed an army of Santo Marcans[5] and employed a small army of mercenaries.[6]

President Duarte also possessed the capabilities to perform a bombing of his capital city.[11]

Public Safety was tasked with controlling the people, using murder and internment to do so.[13]

Santo Marco is part of the United Nations, UNESCO and of Union Latina.[1]

Apart from the rulers' crimes and the resistance of opposition forces such as the Popular Front for Santo Marco, the country suffers from other form of criminality:

Magneto, with his Brotherhood of Evil Mutants, was able to conquer Santo Marco and consolidate his powers and declared it a sanctuary for mutants, assembling an army of misfits persecuted all over the world to attack the United Nations.[14]

The aftermaths of Magneto's death for Santo Marco are unknown.

Magneto, with his Brotherhood of Evil Mutants, was able to conquer Santo Marco. When the X-Men came to remove him, Charles Xavier took for himself the blast from a booby-trapped door to protect his X-Men.[15]

Like this? Let us know!
Retrieved from "https://marvel.fandom.com/wiki/Santo_Marco_(Country)?oldid=5050104"
Community content is available under CC-BY-SA unless otherwise noted.