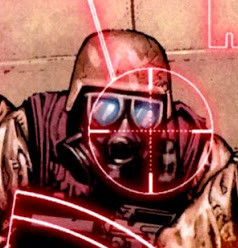 The Santo Marco Army is a component of the Armed Forces of the Republic of Santo Marco.[1]

At some point, tension grew in the country, with television talking about tribal grudges and atrocities on both sides of the conflict. Despite the presence of international observers, including United Nations Blue Helmets, president General Luis Augustine had soldiers to gather citizens to stadiums to use a retrofitted Sentinel to gene scan them, separating out everyone from the same tribe as the main rebel leaders, before performing mass killings[2]

When a tsunami hit Santo Marco, the army didn't arrive in time to evacuate a village, and Storm consequently intervened to stop it. Suncorp's soldiers arrived instants later (seemingly confused for the Army), inflicting upon Storm their anti-mutant bigotry. They then helped the inhabitants (later returning in an attempt to expel the inhabitants and take the land for a resort that was foiled by Storm).[3]

Retrieved from "https://marvel.fandom.com/wiki/Santo_Marco_Army_(Earth-616)?oldid=5635418"
Community content is available under CC-BY-SA unless otherwise noted.