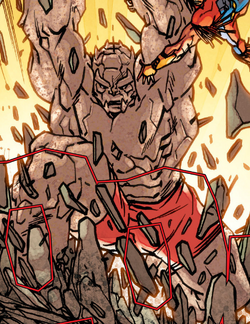 Rockslide was among his fellow X-Men teammates who were playing a game of baseball when the Press Gang from Genosha attacked them in order to kidnap their healer Triage. During the ambush Rockslide got hit by a cosmic blast by Havok which put a hole in his chest.[1]

As the fight went on, Rockslide had to pull himself back together by absorbing the rock around him to patch up his body, but once done the battle was over as the Press Gang successfully escaped with hostages back to Genosha with the help from the possessed Tempus.[2]

Santo was chosen along with specific other members to head to Genosha in order to rescue their friends. Arriving in Hammer Bay, Rockslide and the others made touchdown taking the Press Gang by surprise.

He went on a rampage by plummeting Rogue out of the sky and then smashed the ground with his fists knocking Bulletproof off balance so Thunderbird would have the upper-hand. Wicked tried to use her summoning abilities to keep him busy but she failed.[3]

Rockslide received a telepathic message from Phoenix letting him and the rest of the X-Men know that Cameron Hodge had been resurrected. He helped with the evacuation of the city, then regrouped with the others to help take him down but during the fray Havok, Wolfsbane, and Bombshell sacrificed themselves by flying the Blackbird straight into Hodge as Bombshell and Havok used their abilities to create a huge explosion killing Hodge once more.

Santo was last seen with everyone as they mourned the death of their comrades.[4]

Seemingly those of the Santo Vaccarro of Earth-616.

Seemingly those of the Santo Vaccarro of Earth-616.

Like this? Let us know!
Retrieved from "https://marvel.fandom.com/wiki/Santo_Vaccarro_(Earth-24201)?oldid=5740628"
Community content is available under CC-BY-SA unless otherwise noted.