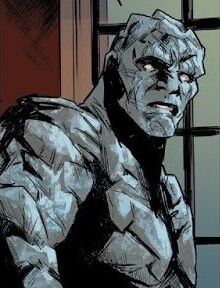 I'm Rockslide, and I can't be scared or killed. If you go crazy evil or something, I'm the one that's going to take you out.

Santo Vaccarro was sent to the Xavier Institute where he befriended Hellion and the would-be Hellions Training Squad. He was originally advised by Iceman, but was selected by Emma Frost to be part of her prized Hellions Squad.[4] Santo and the rest of the Hellions went on to win the Field Day Tournament[5] and were declared the best squad at the end of the school year.[citation needed]

During the summer vacation, Julian, from a well-to-do background, invited his friends to his home. The Hellions ran into trouble quickly, as his and Mercury's appearances along with Dust's dress disturbed people at the airport. After a brief struggle, the group was allowed to board, and made their way to Julian's home in California. Soon, the team encountered the Kingmaker, from whom they each received a trial wish. Santo's wish was to become a World-class Champion in superhuman wrestling. However, when the Hellions eventually refused a permanent deal with the Kingmaker, the Kingmaker shattered Santo with a laser blast. Julian used his telekinesis to piece Rockslide back together, and together the Hellions defeated the Kingmaker.[4]

Soon after returning to the school after the vacation, the Scarlet Witch created the reality known as the House of M. In this reality, Santo was once again a champion superhuman wrestler. After the effects of M-Day, he was one of the few students who didn't lose their powers. The depowered students and staff were sent back to their homes. One bus was bombed by anti-mutant religious zealot Reverend William Stryker, and Santo's former teammate and friend Tag was among those killed. The X-Men held a funeral for those students whose parents would not accept them, and Santo reflected upon how he had "failed" by not being able to save those killed.[6]

With the mutant population drastically decreased, the government sent the Sentinel O*N*E* Squad to watch over the school, which began housing as many remaining mutants as would take refuge. All of the remaining students were placed by Emma Frost into an all-out brawl, and the ones deemed to be the best were to be assigned to become a group of in-training X-Men. Santo made the team and began training to become a X-Man.[7]

William Stryker continued his terrorist attacks against the school. Santo's teammate Elixir ended Stryker's plans by killing him. The New X-Men, with the help of Prodigy, then made the connection between Stryker and Nimrod. The team leader, Surge, then decided that the team would find and destroy the robot. When the team confronted Nimrod, Rockslide was obliterated in the battle. Hellion and Mercury tried desperately to awaken and to piece him back together, but Rockslide's remains were initially unresponsive. Thankfully, even in his shattered form he was able to survive, and was finally put back together, only to become larger and more rugged than his previous form. Rockslide was later seen talking to Match and Anole about their abilities and how useful or non-useful they would be if they joined the New X-Men team, indicating Match and Anole may be possible candidates for admission onto the team. He was at the memorial service for all the students lost in Stryker's attack on the institute.[8]

Rockslide accompanied the X-Men when they jumped from the Blackbird to save Mercury from the Facility. He helped with great enthusiasm during the fight, and in the aftermath, made fun of Shadowcat and her powers, saying that being an X-Man must be "really hard". Kitty then jokingly threatened to kill him.[9]

Santo and the other students were captured by Belasco, and taken to Limbo. While hiding from Belasco, along with Blindfold, Match, Loa, Anole, Wolf Cub, Pixie, and Gentle, Santo was unsure what to do. As demons approached the group, Santo fought them off, but then seemingly exploded when he tried to shoot his fists at them. Santo reconstituted himself in a magma rock form impervious to magic and beat the badness out of Illyana, who then helped them to rescue their fellow students and kill Belasco. Back home Rockslide threatened to quit if Pixie and Anole weren't made part of the New X-Men.[10]

Rockslide was one of the New X-Men that went up against the Hulk. He knocked over the Hulk so the other students could hold him down, but was knocked away when Hulk regained his strength. When Rockslide attacked him alone, it appeared that Hulk knew who he was and what he could do. Hulk ripped off both his arms, stepped on him, and then tore off his legs. He then got rid of Rockslide's limbs by throwing them a great distance, preventing Rockslide from using his powers and the ability of ambulatory function. Ironically, Santo had stated that as a kid he pretended he was the Hulk.[11]

Rockslide was playing pool with X-23 and Anole; he and X-23 tried to convince Anole to let them cut his other arm off. After Santo called Anole a sissy, Anole got offended and pushed him out the window while Rockslide proclaimed "I swear I didn't know! Don't be so sensitive!" After Rockslide refused to blow himself up, Anole called him a sissy to get him to do it. Anole then offered to try and blow up Santo himself.[12]

Santo later agreed to stay up with Indra because he was worried that he was going to die. While having an indoor campfire, Santo pointed out that it didn't matter how old they were, they're mutants and someone was going to come gunning for them, and when they did he wanted to go down fighting. Later, he outed Anole as gay to some of the other students, though Loa was already aware and said that everyone already knew of Anole's orientation.[13]

After the X-Men were disbanded,[14] Rockslide was in Florida when Blindfold found him and explained her vision of their Young X-Men team. When Donald Pierce (impersonating Cyclops) offered Santo a spot on the team, he agreed to join only if Blindfold was also accepted. The other young mutants recruited were Santo's former classmates Dust and Wolf Cub, along with newcomer Ink.[15]

During their first adventure, the Young X-Men battled the New Mutants and revealed Donald Pierce's charade. Unfortunately, Wolf Cub was killed, an event that hit Santo especially hard.[16] Santo took out much of his anger on Cyclops, but still agreed to join the X-Men in San Francisco.[17]

Rockslide was one of the only Young X-Men to remain a full-time member. He participated in defeating the Y-Men,[18] the revelation of Cipher,[19] and the battle with the Neo on the Golden Gate Bridge.[20]

When Dust seemingly died, Rockslide went into a berserker rage and almost killed Donald Pierce again. Santo seemed moved the most by the death of his friend, and was filled with joy when she was revived.[20]

During the Skrull invasion of Earth, Rockslide was teamed with Angel in battle.

Later, along with Hellion, Rockslide was one of the mutants inciting the riots in San Francisco during Simon Trask's Humanity Now! and Proposition X rallies.

While Santo and Mercury watched a training session between Pixie and Nightcrawler, Pixie suddenly stabbed Kurt with her Souldagger. They ran in and moved Pixie away from Kurt's unconscious body. When Beast entered Pixie regained her senses. After she removed her dagger, Magik's Soulsword emerged from Kurt's chest and Magik teleported in ready to reclaim her sword.

Rockslide took on Illyana, thinking he was still resistant to magic, forgetting that his resistance occurred only when he was composed of Limbo's terrain. Illyana shocked him by easily defeating him. After he reformed, the gathered X-Men held a meeting and he along with Mercury were put on a team of more magic-resilient X-Men being sent to Limbo.

Rockslide reformed out of Limbo's terrain as the team entered Belasco's castle to assist Pixie. Finding Illyana defeated by Witchfire and Pixie transformed into a demon, Rockslide and Mercury were forced to fight magically mind-controlled Colossus and Wolverine.[21]

After the Schism, Santo went to Westchester along with many other mutant students.[citation needed]

Santo was one of the many mutants that opposed the crazed X-Man from remaking the world in his image. When X-Man realized that his vision of the world would never come about with the X-Men around, X-Man made his enemies vanish in an instant, including Santo.[25]

Santo and the others were transported to another plane of existence by X-Man created in an attempt at a utopia where they and all other mutants would be at peace, altering their memories so they wouldn't resist.[26]

Rockslide was a student of the Summers Institute for Higher Learning and was a member of its History Division.[27] He was in the library looking at books when Dean Angel welcomed a new student named Luna.[26]

Rockslide showed up in the lunchroom eating when Shark-Girl brought up in front of the other students that Glob was writing a fan fiction based on a mission of the X-Men and all of them were involved in this battle where Anole got hurt and Rockslide got beat up by the four-armed villain known as Forearm. Pixie then grabbed Glob's notebook in order to read it, but she was stopped by Armor. They all decided to meet up later at the library to study.[27]

Rockslide was seen briefly in Mr. Jeffries' room as he taught the history surrounding Hope Summers' sacrifice so that the rest of mutantkind could live on.[27]

Later, as Santo and the others arrived at the Hope Summers Memorial Library to study, Santo noticed a fire ablaze further downtown. Armor and Pixie decided to help out, saying that Civil Management was what they trained for.[27]

Rockslide and the others made their way down to the large house burning down. As he stood in front of the fire, he became surprised to see the X-Men front and center ready to contain the situation.[27]

Santo was eventually allowed to leave X-Man's reality when X-Man decided to release the mutants he trapped there.[28]

Santo later became a citizen of the mutant nation of Krakoa. He attended the celebration of Krakoa being officially recognized as a nation. He was seen standing near Match at the party on Krakoa while Wolverine handed Gorgon a beer.[29]

Santo later befriended a mutant who was from Arakko in the forest of Krakoa, Summoner, who he played a traditional Arakko game with, which reveals weakness in each player. Growing closer, he went with Summoner to Arakko to rescue Unus, only to be betrayed and killed by Summoner, by destroying his energy form.[30] When the Five attempted to resurrect Santo, they learned, to their horror, that because he died in Otherworld, the real Santo perished as well as Otherworld is a nexus to the multiverse. The copies of Santo within Cerebro were overwritten in all backup helmets and the version that was resurrected was instead a combination of other Santos from across the multiverse. In order to honour his death, Polaris used his remains to build the portal for the Ten of Swords challenge.[31]

Rockslide was considered a General Threat by the O*N*E, at the time of the M-Day.[38] Nimrod classified him as a Threat Level: Medium,[35] and after defeating him, he was red-flagged and allegedly reclassified by the O*N*E.[37]

Like this? Let us know!
Retrieved from "https://marvel.fandom.com/wiki/Santo_Vaccarro_(Earth-616)?oldid=5816655"
Community content is available under CC-BY-SA unless otherwise noted.