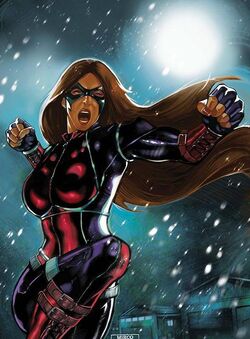 Sara Ehret was a pregnant scientist at Phelcorp (a subsidiary of OsCorp) where she worked on gene therapy to cure Parkinson's disease when she was accidentally exposed to "Lot 777". The virus rewrote the DNA in her cells leaving her in a coma for four months. Coming out of her coma, Ehret went on to have her child Madeline with no complications. However, when her family came under threat by falling debris she displayed superhuman strength in order to save them. Sara then became Jackpot, a registered super-hero. She lived in Park Slope, Brooklyn. [citation needed]

However, she wasn't interested in being a super-hero, preferring to go back to her normal life and family instead. Alana Jobson recognized Sara and showed genuine enthusiasm at paying her for the use of Sara's Jackpot identity and license. Sara took the offer and gave up costumed crime fighting. Alana used a dangerous mixtures of drugs including Mutant Growth Hormone to grant herself the powers of super-strength, stamina, and invulnerability associated with the Jackpot identity. Alana was attracted to Sara but never told her.[citation needed]

While fighting Commanda and Blindside, Alana was pumped with the blindness serum used by Blindside to trump his enemies. Spider-Man came to the rescue with an antidote, which cleared Alana's vision but the blindness serum had a terrible reaction with the combination of drugs that gave her the powers, and Alana died shortly thereafter. Investigating Jackpot's identity, Spider-Man went to what he believed was Jackpot's house only to find Sara Ehret, who told him she was not the super-heroine Jackpot and sent Spider-Man away. Later, Spider-Man discovered the truth about Alana and Sara and notified Sara about Alana's death while blaming Sara for evading her responsibilities and allowing the otherwise powerless and untrained Alana to go to her doom. Spider-Man told her that people with powers do not have a choice of giving up their responsibilities.[citation needed]

Distraught, Sara reclaimed her heroic identity. She came into conflict with Boomerang and a new Rose, who learned her identity. Under Rose's orders, Boomerang tracked down Sara to her house and murdered her husband in front of her and her daughter. Sara got revenge and unmasked the Rose, but was forced to change her and her daughter's identity, taking the name Alana Jobson.[citation needed]

Like this? Let us know!
Retrieved from "https://marvel.fandom.com/wiki/Sara_Ehret_(Earth-616)?oldid=5744695"
Community content is available under CC-BY-SA unless otherwise noted.