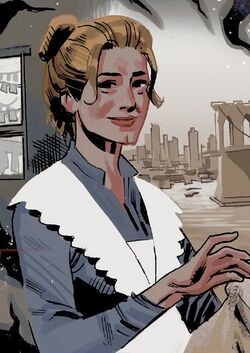 In order to grow you must let go of the past.

Sarah Rogers is the mother of the original Captain America: Steve Rogers. She was born and raised in Ireland. It was there that she met and married Joseph Rogers. The two immigrated to the United States of America. It is there she gave birth to their son Steve on July 4, 1920. Sarah raised young Steve to the best of her ability in New York City. Over time, Joseph lost his job and could not find work he turned to drink becoming an alcoholic. He also began abusing both Steve and Sarah.[1]

Following Joseph's death due to a heart attack around 1926,[1] Sarah began to work double shifts at a garment factory and took in laundry to help ends meet and support her young son.[2] Sarah died some years later of illness.[3] The enduring message of Sarah Rogers to her son Steve was one of strength, perseverance, and heart, as found in the following quote: "A strong heart will take you further than any physical strength. A strong heart means you'll never quit..."[2]

Like this? Let us know!
Retrieved from "https://marvel.fandom.com/wiki/Sarah_Rogers_(Earth-616)?oldid=6008118"
Community content is available under CC-BY-SA unless otherwise noted.