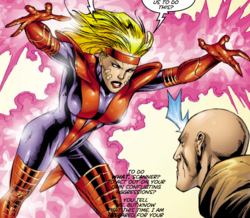 Scanner was among the many mutants recruited by Fabian Cortez to become a member of the second incarnation of the Acolytes. She was often seen as weak by the other Acolytes, and she lacked the confidence that the others had.

She was one of the few who survived not only the deadly attack by Holocaust, but also the subsequent loss of the Acolytes' orbital base Avalon thanks to an escape pod that also counted Cyclops among its fleeing passengers. Scanner survived with the help of Unuscione, Cargill, Sven and Harlan Kleinstock, and Cyclops. Upon their return to Earth, Scanner helped Cyclops find the X-Men´s base in the Australian Outback and willingly gave herself up to the authorities who sought her arrest. She later escaped, only to rejoin the Acolytes.

On M-Day, Scanner was depowered due to the Scarlet Witch.[2]

None, Ryall is a depowered mutant.

Like this? Let us know!
Retrieved from "https://marvel.fandom.com/wiki/Sarah_Ryall_(Earth-616)?oldid=6076202"
Community content is available under CC-BY-SA unless otherwise noted.