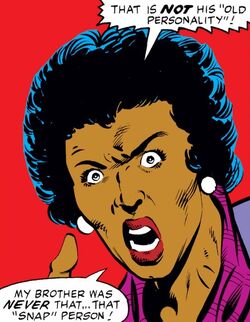 Sarah Casper is the Falcon's younger[2] sister. Her father Reverend Paul Wilson was murdered trying to stop a fight between rival gangs. Her mother Darlene was later murdered trying to save her children from a mugger. After the death of their mother her brother Samuel's personality changed and he became the crude criminal Snap Wilson much to Sarah's chagrin. Later the Red Skull erased Samuel's memories as Snap via the cosmic cube turning Sam back into the loving brother Sarah knew. Sarah would later relate this tale to Sam's girlfriend Leila Taylor and their friend Carol Davis.

Sarah is a widow. After the death of her husband her brother Sam tried to look out for Sarah's son Jody Casper. Jody Casper ran numbers for a man named Stone Face but after a run in with the law Jody turned his life around.

Like this? Let us know!
Retrieved from "https://marvel.fandom.com/wiki/Sarah_Wilson_(Earth-616)?oldid=6429824"
Community content is available under CC-BY-SA unless otherwise noted.