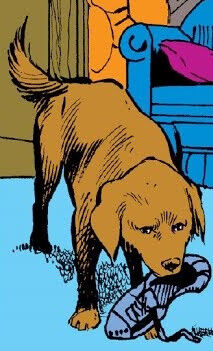 Sassafrass was a puppy belonging to Hank McCoy, the Beast, which he acquired whilst serving with the Defenders. Sassy, basically a good dog but with a tendency to forget to go on the newspaper Beast had put down, accompanied the Defenders when they relocated to Colorado and became the New Defenders. She was still with the team up until it dissolved.[2]

Like this? Let us know!
Retrieved from "https://marvel.fandom.com/wiki/Sassafras_(Earth-616)?oldid=6420207"
Community content is available under CC-BY-SA unless otherwise noted.