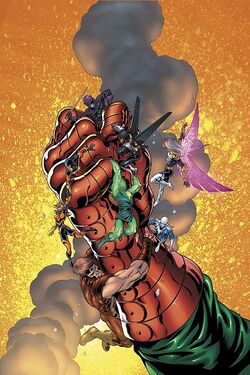 The Satan Claw is a weapon utilized by Baron Wolfgang von Strucker that bestows great strength upon himself. It also permits him to unleash electrical shocks. Since its initial creation, it has been damaged and even destroyed, yet it has been continually fixed, rebuilt, and updated over the years.

Aside from the strength enhancement and electrical shocks of the original glove, future versions of the Satan Claw have had a Gatling gun, sharp points added to the finger tips, been nuclear powered, and has been able to fire razor sharp blades, explosive shells, and has even come equipped with a teleportation device. Following the loss of his hand in battle with Nick Fury, the Satan Claw has become a prosthetic limb of sorts for Baron Strucker.

Fury once used a confiscated Satan Claw to battle a robot of Yellow Claw. A rogue S.H.I.E.L.D. agent once used the Satan Claw until it was removed and destroyed by Spider-Man. The Punisher later used a version of the Satan Claw against the Rhino when he was using various objects in battle against super powered villains. Sharon Carter later wore the glove to take down Arnim Zola's forces.

In Earth-65, Cindy Moon wore a mechanical power glove which allowed her to mimic the various technologies S.I.L.K. had stolen from the Prime Marvel Universe, as well as house Spider-Bots that drained Spider-Woman of her powers.[1] Cindy later removed the glove after employing a Reed Richards EMP to gain the upper hand against the Spider-Women by neutralizing Silk's Super-Adaptoid Armor, but after Gwen utilized Radioactive Spider Isotopes to temporarily regain her powers and knock Cindy unconscious, Jess crushed the discarded power glove beneath her heel.[2]

In Earth-8096, the Satan Claw is a mechanical arm-like device that absorbs the youth of the victim making the wearer younger and stronger. It was used by Baron Strucker to absorb the S.H.I.E.L.D. agent to make himself younger and stronger again, almost sucked the youths of Nick Fury, Hawkeye, and Captain America. In an ensuing battle over the Cosmic Cube, the Satan Claw was destroyed by one of Hawkeye's Trick Arrows.

The Satan Claw is a mechanical arm-like device that worn by Baron von Struker. When Captain America was unable to reach the cannon in time, he heads to the building housing the radio dish, encountering Baron Wolfgang Von Strucker. Captain America plants charges along the steel support beams of the radio dish tower to destroy it when Strucker intercepts Captain America, engaging in a fist fight, using the Claw to attack him. The radio dish is destroyed, but the cannon still hits one of the wings of the plane carrying the Invaders. Fortunately, they all parachute out in time. Strucker surprises Captain America and manages to knock him unconscious using the Claw as they both fall from the exploding tower.[3]

Like this? Let us know!
Retrieved from "https://marvel.fandom.com/wiki/Satan_Claw?oldid=6432483"
Community content is available under CC-BY-SA unless otherwise noted.