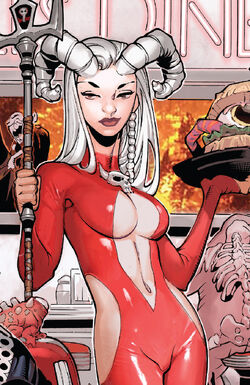 Flattery will get you nowhere -- the King of Hell doesn't share power, and if I were you, I'd stick my ass in a bucket now... because when my father hears what you just said, he's going to burn it.

Satana Hellstrom was born a couple years after her brother Daimon. When she was still a child, her mother Victoria Hellstrom discovered her husband and Satana performing a black magic ritual in the basement of their New England mansion. Victoria went mad upon witnessing her husband's transformation and died soon afterward.[6] Daimon was placed in an orphanage, and Satana was taken to "Hell" to be trained in the use of her demonic powers.[7]

Satana was possessed by a powerful demon called the Basilisk. Satana remained in full control of her mind and body, however, and the Basilisk had to do her bidding when she released it from her body. However, she became aware that the more she used the Basilisk to serve her ends, the stronger it grew, and that it might one day turn against her.[7]

Satana was sent to Earth, where she continually needed to feed on souls. She often posed as a prostitute to meet her victims.[1]

Her father continued to test her, Satana eventually refusing to serve him. She tried her best to fight other evil forces as well as learn about humans.[8]

At one point, the sorcerer Brian Abelard created an illusion that she was the woman Judith Chambers in a plot to take control of the Basilisk. He and the Camarilla of the N'Garai managed to separate Satana and the Basilisk, but Satana called upon the demon's help before they could sacrifice her, killing Abelard and the Camarilla, as well as re-merging the demon with her.[9]

Satana learned Doctor Strange had used Shartra's Book of the Damned. His physical body was cursed to be a werewolf, while his astral self was imprisoned by demons. Knowing he was of great importance, Satana freed him and died, as did the Basilisk.[10] [11]

As a supernatural being, however, Satana's death was not permanent. Her spirit returned to her father's realm of Hell for a time, until she and a cabal of demons arranged to have her soul placed into a soulless body on Earth.[3][4][12]

At some point she apparently died again. Satana was resurrected again by Doctor Strange and teamed with two other magic-wielding females to defeat a powerful mystic enemy called the Hellphyr. It was later revealed that the three witches formed a coven in order to protect the Tome of Zhered-Na from would-be thieves such as Doctor Strange.[13]

Satana returned to travelling the country feeding on the souls of men and obeying her fathers contract to send one in every ten souls she takes to hell. One of these souls belonged to Jason Silence whose twin sister Jennifer was given a book of magic which she used to temporarily trap Satana in a pentagram of both divine and unholy design. Satana tricked her way free but having signed a contract to free Jason's soul, travelled to hell to search for him. The mother of all hell's vermin, the Scorpion Queen, had stolen Jason's soul from Satana's father and she was forced to fight her to free him. Upon returning Jason to Earth, Satana used him and his sister for decoration in her lair.[2]

After Jennifer Kale infiltrated the Raft with ease, Luke Cage teamed up with Doctor Strange to bring Satana into the Thunderbolts.[14]

Traveling to the Past

She escaped together with several other inmates who were members of the Thunderbolts. Due to a failure of the teleportation technology of their tower (caused by Man-Thing), the tower began to move in time as well as in space. They ended up in World War II teaming up with the Invaders to battle the Nazis.[15] They next end up in Victorian London.[16] They went even further back in time ending up in King Arthur's court in Camelot.[17]

They eventually bounced back to the time of the original Zemo-led Thunderbolts team.[18] After the Fixer killed his younger-self, reality began to collapse, forcing the Fixer to assume his younger self's place. Following this, Satana returned to the future with the rest of the Thunderbolts.[19]

Satana eventually returned to the underworld to rule her own Hell. With the business of damnation booming, due to people's preference to spend afterlife in a chaotic self-indulgent frenzy together with the likes of dead rock stars and overdosed actors, Satana set out to make her realm stand out, by turning Doctor Strange into her Hell's newest attraction.[20]

After abducting Strange from a fight in the Dimension of Dreams,[21] she forced him to eat lethal food from her Hell's diner, so once he died his soul would be trapped there forever. While Satana left Master Pandemonium to guard Strange, the sorcerer used his astral projection to make himself vomit and stop the food poisoning. Following Strange's escape, Satana decided to settle with using Jim Morrison instead.[20]

Satana is a succubus, a particular type of demon blessed with great beauty and magical powers. Satana's soul was formerly bonded to an arch-demon and agent of destruction know as the "Basilisk." It was a very powerful demon, considered one of the deadliest, and she could release him from inside her and then return it to her.

Satana has some knowledge of magic.

Was shown kissing Angela in Strikeforce #2

Like this? Let us know!
Retrieved from "https://marvel.fandom.com/wiki/Satana_Hellstrom_(Earth-616)?oldid=6174165"
Community content is available under CC-BY-SA unless otherwise noted.